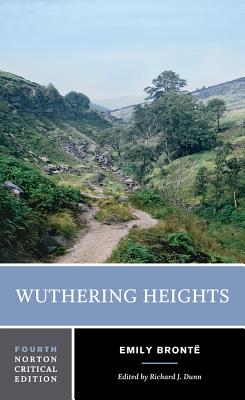 As featured on PBS’s The Great American Read

The text of the novel is based on the first edition of 1847.

For the Fourth Edition, the editor collated the 1847 text with the two modern texts (Norton’s William J. Sale collation and the Clarendon), and found a great number of variants, including accidentals. This discovery led to changes in the body of the Norton Critical Edition text that are explained in the preface. New to "Backgrounds and Contexts" are additional letters, a compositional chronology, related prose, and reviews of the 1847 text. "Criticism" collects five important assessments of Wuthering Heights, three of them new to the Fourth Edition, including Lin Haire-Sargeant’s essay on film adaptations of the novel.

Emily Brontë (1818-1848) spent most of her life in a stone parsonage in the small village of Haworth on the wild and bleak Yorkshire moors. Despite the isolation of Haworth, the Brontë family shared a rich literary life.

Richard J. Dunn is Professor of English at the University of Washington. His books include the Norton Critical Edition of Wuthering Heights, Approaches to Teaching Dickens’s David Copperfield, David Copperfield: An Annotated Bibliography, The English Novel, Twentieth-Century Criticism, Defoe to Hardy, and Oliver Twist: Whole Heart and Soul.
Loading...
or
Not Currently Available for Direct Purchase