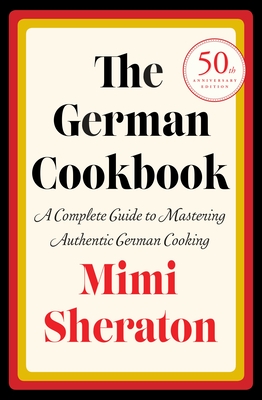 Now in a celebratory fiftieth anniversary edition, The German Cookbook is the definitive authority on German cuisine, from delicious soups and entrees to breads, desserts, and the greatest baking specialties in the world. In addition to easy-to-follow recipes, renowned food writer Mimi Sheraton also includes recommendations for restaurants at home and abroad, as well as tips on ordering traditional fare.

Historically, German influence on the American diet, from hamburgers and frankfurters to jelly doughnuts and cakes, has been enormous. But, as the author writes in a brand-new Preface, “Americans have begun to realize that Austrian and German cooks have long been adept at preparing foods that are newly fashionable here, whether for reasons of health, seasonality, economy or just pure pleasure.” Many standards foreshadowed the precepts of new cooking, such as pickling, and combining sweet with savory. Alongside old Bavarian favorites, The German Cookbook includes recipes for nose-to-tail pork, wild game, and organ meats; hearty root vegetables and the entire cabbage family; main-course soups and one-pot meals; whole-grain country breads and luscious chocolate confections; and lesser-known dishes worthy of rediscovery, particularly the elegant seafood of Hamburg.

Since Mimi Sheraton first began her research more than fifty years ago, she has traveled extensively throughout Germany, returning with one authentic recipe after another to test in her own kitchen. Today, The German Cookbook is a classic in its field, a testament to a lifetime of spectacular meals and gustatory dedication. So Prosit and gut essen: cheers and good eating!

Mimi Sheraton is a pioneering food writer and a former restaurant critic for The Village Voice, Time, Condé Nast Traveler, and The New York Times. Her writing on food and travel has appeared in such magazines as The New Yorker, Vanity Fair, Smithsonian, Vogue, Town & Country, New York, and Food & Wine. She has written sixteen books, including The German Cookbook, first published in 1965 and never since then out of print, and a memoir, Eating My Words: An Appetite for Life. Her book The Whole World Loves Chicken Soup won both the IACP and James Beard awards, and she won a James Beard journalism award for her Vanity Fair article on the Four Seasons’ fortieth anniversary. Her latest book is 1,000 Foods to Eat Before You Die. She was born in Brooklyn and is a longtime resident of Greenwich Village.
or support indie stores by buying on
Copyright © 2020 American Booksellers Association