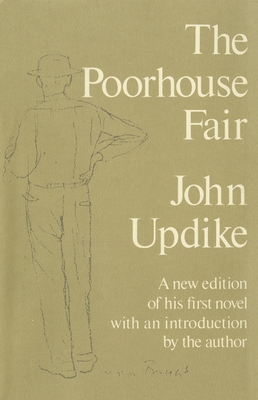 The Poorhouse Fair, John Updike’s first novel, was written in 1957 and published in January of 1959. For this, its sixth printing, the author has appended an introduction discussing the book’s inspiration, its aesthetic sources and models in classics of science fiction, and the way in which its future (projected to be about 1977) compares with the present. The Poorhouse Fair was hailed at the time of its publication as “a rare and beautiful achievement” and “a work of intellectual imagination and great charity.” Though its future has degenerated into our present, and Updike’s later work is better known, such critics as Henry Bech have hailed this little novel as, still, “surely his masterpiece.”

John Updike was the author of more than sixty books, eight of them collections of poetry. His novels, including The Centaur, Rabbit Is Rich, and Rabbit at Rest, won the Pulitzer Prize, the National Book Award, the National Book Critics Circle Award, and the William Dean Howells Medal of the American Academy of Arts and Letters. He died in January 2009.
Loading...
or
Not Currently Available for Direct Purchase