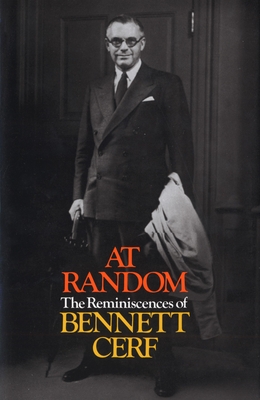 The Reminiscences of Bennett Cerf

“I’ve got the name for our publishing operation. We just said we were going to publish a few books on the side at random. Let’s call it Random House.” So recounts Bennett Cerf in this wonderfully amusing memoir of the making of a great publishing house. An incomparable raconteur, possessed of an irrepressible wit and an abiding love of books and authors, Cerf brilliantly evokes the heady days of Random House’s first decades.

Part of the vanguard of young New York publishers who revolutionized the book business in the 1920s and ’30s, Cerf helped usher in publishing’s golden age. Cerf was a true personality, whose other pursuits (columnist, anthologist, author, lecturer, radio host, collector of jokes and anecdotes, perennial judge of the Miss America pageant, and panelist on What’s My Line?) helped shape his reputation as a man of boundless energy and enthusiasm and brought unprecedented attention to his company and to his authors. At once a rare behind-the-scenes account of book publishing and a fascinating portrait of four decades’ worth of legendary authors, from James Joyce and William Faulkner to Ralph Ellison and Eudora Welty, At Random is a feast for bibliophiles and anyone who’s ever wondered what goes on inside a publishing house.

Bennett Cerf was born in 1898 in Manhattan and graduated from Columbia University with a degree in journalism. In 1925 he acquired the Modern Library with Donald Klopfer, providing the foundation for their next publishing venture, Random House. A major figure of American publishing for more than four decades, Bennett Cerf died in 1971.

Christopher Cerf is an author, editor, and Emmy- and Grammy-winning songwriter and television producer. A longtime contributor to Sesame Street, and cofounder and creative producer of the PBS literacy-education series Between the Lines, Christopher Cerf is a former contributing editor of National Lampoon and a former senior editor at Random House.
or
Not Currently Available for Direct Purchase
Copyright © 2020 American Booksellers Association