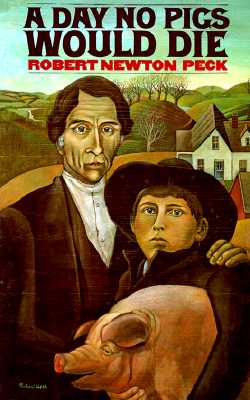 A Day No Pigs Would Die

Out of a rare American tradition, sweet as hay, grounded in the gentle austerities of the Book of Shaker, and in the Universal countryman's acceptance of birth, death, and the hard work of wresting a life from the land comes this haunting novel of a Vermont farm boyhood.

In the daily round of his thirteenth year, as the seasons turn and the farm is tended, the boy -- whose time is the only-yesterday of Calvin Coolidge, whose people are the Plain People living without "frills" in the Shaker Way -- becomes a man.

That is all, and it is everything. The boy is mauled by Apron, the neighbor's ailing cow whom he helps, alone, to give birth. The grateful farmer brings him a gift -- a newborn pig. His father at first demurs ("We thank you, Brother Tanner," said Papa, "but it's not the Shaker Way to take frills for being neighborly. All that Robert done was what any farmer would do for another") but is persuaded. Rob keeps the pig, names her, and gives her his devotion ... He wrestles with grammar in the schoolhouse. He hears rumors of sin. He is taken -- at last -- to the Rutland Fair. He broadens his heart to make room even for Baptists. And when his father, who can neither read nor cipher, whose hands are bloodied by his trade, whose wisdom and mastery of country things are bred in the bone, entrusts Rob with his final secret, the boy makes the sacrifice that completes his passage into manhood.

All is told with quiet humor and simplicity. Here are lives lived by earthy reason -- in a novel that, like a hoedown country fiddler's tune, rings at the same time with both poignancy and cheer.

Praise For A Day No Pigs Would Die…

“Reading this book is like sipping hot cider in front of a crackling potbellied stove. Every page is suffused with wit and charm and glowing with warmth.”–Newsweek

“A lovely book. . . . Honest, moving, homely in the warm and simple sense of the word. . . . It is small, accepting and loving and it succeeds perfectly.”–Boston Globe

“You’ll find yourself caught up in the novel’s emotion from the very opening scene. . . . Love suffuses every page.”–The New York Times


"With plenty of Yankee common sense and dry wit, and some pathos as the boy at 13 takes on the duties of a man. For boys of this age and for the young of any age."--School Library Journal.

Robert Newton Peck comes from generations of Yankee farmers. Like the Vermont folk he writes about in his novel, he was raised as a boy in the Shaker Way, which endured even after the sect itself had died out. Its view of life is embodied in the character of his young protagonist's father, who believed that a faith is more blessed when put to use than when put to word: "A man's worship counts for naught, unless his dog and cat are the better for it."
Loading...
or
Not Currently Available for Direct Purchase