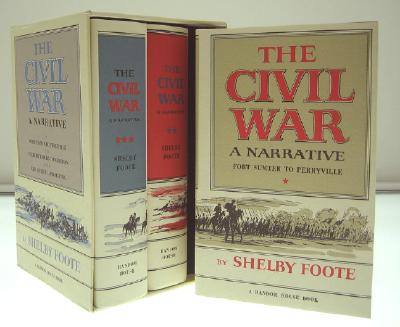 Selected by the Modern Library as one of the 100 best nonfiction books of all time
A stunning literary and historical achievement, the three volumes of Shelby Foote' s The Civil War vividly bring to life the four years of torment and strife that altered American life forever. Presented in a handsome boxed set, these three beautifully bound hardcovers are an essential addition to every American history collection.
Taking the reader from the drama of Jefferson Davis's resignation from the United States Senate and Abraham Lincoln's arrival in the nation's capital to Davis's final flight and capture and Lincoln's tragic death, Foote covers his subject with astonishing depth and scope. Every battle, every general, and every statesman has its place in this monumental narrative, told in lively prose that captures the sights, smells, and sounds of the conflict. Never before have the great battles and personalities of the Civil War been so excitingly presented, and never before has the story been told so completely.
With a novelist's gift for narrative and a historian's commitment to research, Shelby Foote's epic retelling is the definitive account of the Civil War, a trilogy that has earned a place of honor on the bookshelves of all Americans.