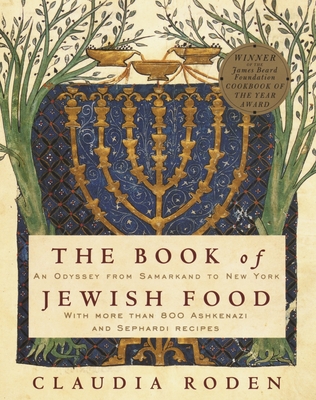 The Book of Jewish Food

An Odyssey from Samarkand to New York: A Cookbook

The Book of Jewish Food traces the development of both Ashkenazic and Sephardic Jewish communities and their cuisine over the centuries. The 800 magnificent recipes, many never before documented, represent treasures garnered by Roden through nearly 15 years of traveling around the world. Includes 50 photos & illustrations.

Claudia Roden was born and raised in Cairo. She completed her formal education in Paris and then moved to London to study art. She travels extensively as a food writer. Her previous books include Mediterranean Cookery, which was published in conjunction with her BBC television series; her seminal A Book of Middle Eastern Food; Everything Tastes Better Outdoors; The Good Food of Italy—Region by Region; and Coffee: A Connoisseur’s Companion. She has won five Glenfiddich prizes, including 1992 Food Writer of the Year and the Glenfiddich Trophy. In 1989 she received the two most prestigious food prizes of Italy—the Premio Orio Vergani and the Premio Maria Luigia, Duchessa di Parma—for her London Sunday Times Magazine series “The Taste of Italy.” She lives in London.
Loading...
or support indie stores by buying on