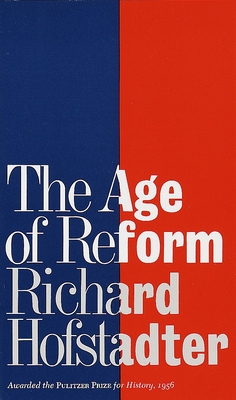 The Age of Reform

Winner of the Pulitzer Prize in Non-Fiction.

This book is a landmark in American political thought. Preeminent Richard Hofstadter examines the passion for progress and reform that colored the entire period from 1890 to 1940 with startling and stimulating results. The Age of Reform searches out the moral and emotional motives of the reformers the myths and dreams in which they believed, and the realities with which they had to compromise.

Praise For The Age of Reform…

"Professor Hofstadter has written a superb book ... The Age of Reform entitles Hofstadter to rank with C. Vann Woodward as a master of creative synthesis, as an interpreter of the past who can add to cold data an emphatic insight that transforms history from a book of the dead into a chronicle of life."-- American Political Science Review

Born in 1916, Richard Hofstadter was one of the leading American historians and public intellectuals of the 20th century. His works include The Age of Reform, Anti-intellectualism in American Life, Social Darwinism in American Thought, 1860-1915, The American Political Tradition, and others. He was the DeWitt Clinton Professor of American History at Columbia University. He died in 1970.
Loading...
or support indie stores by buying on
(This book is on backorder)