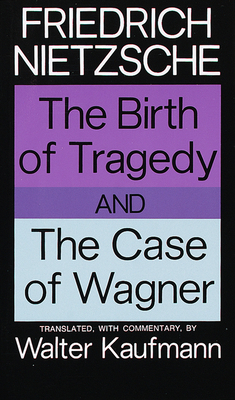 The Birth of Tragedy and The Case of Wagner

Two representative and important works in one volume by one of the greatest German philosophers.

The Birth of Tragedy (1872) was Nietzsche's first book. Its youthful faults were exposed by Nietzsche in the brilliant "Attempt at a Self-Criticism" which he added to the new edition of 1886. But the book, whatever its excesses, remains one of the most relevant statements on tragedy ever penned. It exploded the conception of Greek culture that was prevalent down through the Victorian era, and it sounded themes developed in the twentieth century by classicists, existentialists, psychoanalysts, and others.

The Case of Wagner (1888) was one Nietzsche's last books, and his wittiest. In attitude and style it is diametrically opposed to The Birth of Tragedy. Both works transcend their ostensible subjects and deal with art and culture, as well as the problems of the modern age generally.

Each book in itself gives us an inadequate idea of its author; together, they furnish a striking image of Nietzsche's thought. The distinguished translations by Walter Kaufmann superbly reflect in English Nietzsche's idiom and the vitality of his style. Professor Kaufmann has also furnished running footnote commentaries, relevant passages from Nietzsche's correspondence, a bibliography, and, for the first time in any edition, an extensive index to each book.

Friedrich Nietzsche was born in 1844 in Röcken (Saxony), Germany.  He studied classical philology at the universities of Bonn and Leipzig, and in 1869 was appointed to the chair of classical philology at the University of Basel, Switzerland. Ill health led him to resign his professorship ten years later.  His works include The Birth of Tragedy, Thus Spoken Zarathustra, Beyond Good and Evil, On the Genealogy of Morals, The Case of Wagner, Twilight of the Idols, the Antichrist, Nietzsche contra Wagner, and Ecce Homo. He died in 1900.  The Will to Power, a selection from his notebooks, was published posthumously.

Walter Kaufmann was born in Freiburg, Germany, in 1921, came to the United Stated in 1939, and studied at Williams College and Harvard University.  In 1947 he joined the faculty of Princeton University, where he was Professor of Philosophy until he died in September 1980. He held many visiting professorships, include Nietzsche, Critique of Religion and Philosophy, From Shakespeare to Existentialism, The Faith of a Heretic, Cain and Other Poems, and Hegel, as well as verse translations of Goethe's Faust and Twenty German Poets. He also translated all of the works by Nietzsche listed above.  In addition to On the Genealogy of Morals and Ecce Homo the following appear in Vintage Books: Beyond Good and Evil and, in one volume, The Birth of Tragedy and The Case of Wagner.
Loading...
or support indie stores by buying on