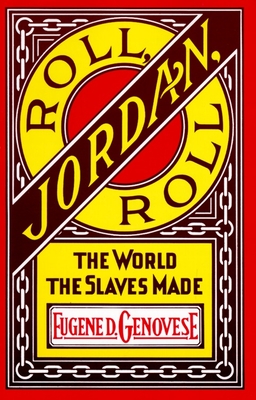 The World the Slaves Made

This landmark history of slavery in the South—a winner of the Bancroft Prize—challenged conventional views of slaves by illuminating the many forms of resistance to dehumanization that developed in slave society.

Rather than emphasizing the cruelty and degradation of slavery, historian Eugene Genovese investigates the ways that slaves forced their owners to acknowledge their humanity through culture, music, and religion. Not merely passive victims, the slaves in this account actively engaged with the paternalism of slaveholding culture in ways that supported their self-respect and aspirations for freedom. Roll, Jordan, Roll covers a vast range of subjects, from slave weddings and funerals, to the language, food, clothing, and labor of slaves, and places particular emphasis on religion as both a major battleground for psychological control and a paradoxical source of spiritual strength. Displaying keen insight into the minds of both slaves and slaveholders, Roll, Jordan, Roll is a testament to the power of the human spirit under conditions of extreme oppression.

Eugene D. Genovese was the author of several books, including Roll, Jordan, Roll, for which he won the Bancroft Prize; The Southern Tradition; and The Southern Front. Genovese was known for his Marxist perspective in regards to the study of power, class, and race relations in during plantation life in the old south.  Genovese passed away in 2012.

Praise For Roll, Jordan, Roll: The World the Slaves Made…

"The most profound, learned, and detailed analysis of slavery to appear since World War II. It covers an incredible range of topics and offers fresh insights on  nearly every page. . . . Genovese's great gift is his ability to penetrate the minds of both slaves and masters, revealing not only how they viewed themselves and each other, but also how their contradictory perceptions interacted." --The New York Times Book Review

"Without modern peer as an historical narrative, as a sensitive functional analysis of a major region and period of American society in general, and the Afro-American community in particular." --The New Republic

"Genovese  has done more than any other American historian to life this tortured subject out of its culture-bound parochialism." --C. Vann Woodward, The New York Review of Books
or
Buy Here
(This book is on backorder)
Copyright © 2020 American Booksellers Association