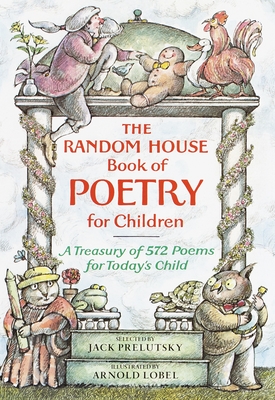 The most accessible and joyous introduction to the world of poetry!

The Random House Book of Poetry for Children offers both funny and illuminating poems for kids personally selected by the nation's first Children's Poet Laureate, Jack Prelutsky. Featuring a wealth of beloved classic poems from the past and modern glittering gems, every child who opens this treasury will finda world of surprises and delights which will instill a lifelong love of poetry. Featuring 572 unforgettable poems, and over 400 one-of-a-kind illustrations from the Caldecott-winning illustrator of the Frog and Toad series, Arnold Lobel, this collection is, quite simply, the perfect way to introduce children to the world of poetry.

JACK PRELUTSKY, long considered the unofficial poet laureate of elementary school kids, was officially names the nation’s first Children’s Poet Laureate in 2006. He has written more than forty books of verse, ranging from his big collectionsof more than one hundred verses each–such as The New Kid on the Block and It’s Raining Pigs and Noodles–to his delightful picture book collections such as: Good Sports: Rhymes About Running, Jumping, Throwing, and More and Behold the Bold Umbrellaphant, a Lee Bennet Hopkins Honor Book. In addition to The Random House Books of Poetry for Children, he has also compiled The 20th- Century Children’s Poetry Treasury, The Beauty of the Beast, Read-Aloud Rhymes for the Very Young, and eight other award-winning anthologies. He was born in the Bronx, has traveled to all fifty states to promote poetry, and now lives in Seattle with his wife, Carolyn.

ARNOLD LOBEL began his career in children’s books in 1961 and illustrated over seventy books, some of which he also wrote. He received the Caldecott Medal for Fables in 1981 and a Caldecott Honor in 1971 for Frog and Toad Are Friends. It’s sequel, Frog and Toad Together, was an 1973 Newberry Honor Book. His last major project before his death in 1987 was The Arnold Lobel Book of Mother Goose (originally published as The Random House Book of Mother Goose). He is widely considered one of the greatest children’s book illustrators of the twentieth century.
Loading...
or support indie stores by buying on