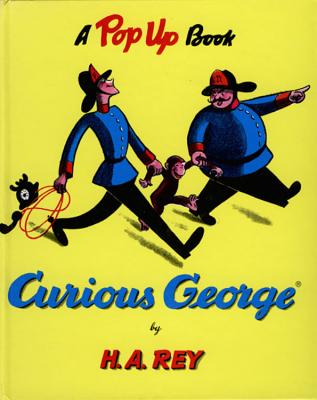 For more than fifty years Curious George has enchanted and entertained generations of young children. He is curious, active, mischievous - what more compatible subject for the delights of a pop-up book? Now young readers can see their favorite sequences come alive as George tries on the yellow hat, escapes along telephone wires, and flies high in the air attached to a large bunch of balloons. Based entirely on the original book Curious George, by H. A. Rey, this book will delight old and new fans alike with George's newfound freedom of motion.

Hans Augusto Rey was born in Hamburg, Germany in 1898. As a child, he spent much of his free time in that city's famous Hagenbeck Zoo drawing animals. After serving in the army during World War I, he studied philology and natural science at the University of Hamburg. He then married Margret Rey and they moved to Montmartre for four years. The manuscript for the first Curious George books was one of the few items the Reys carried with them on their bicycles when they escaped from Paris in 1940. Eventually, they made their way to the United States, and Curious George was published in 1941. Curious George has been published in many languages, including French, German, Japanese, Afrikaans, and Norwegian. Additional Curious George books followed, as well as such other favorites as CECILY G. AND THE NINE MONKEYS and FIND THE CONSTELLATIONS.
Loading...
or
Not Currently Available for Direct Purchase