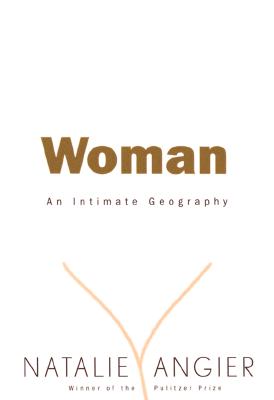 A Pulitzer Prize-winner offers a book about femaleness --- in body and mind --- that could prove as important as The Second Sex or Our Bodies, Our Selves and as fresh as Women's Bodies, Women's Wisdom. With the clarity, insight, and sheer joy of language that has secured her reputation as one of the New York Times's premier stylists, Natalie Angier lifts the veil of secrecy from that most enigmatic of evolutionary masterpieces, the female body, exploring the essence of what it means to be a woman. Angier's thoughts on everything from organs to orgasm evince her famously playful originality, yet stand their ground in scientific fact. She also dives into hot topics such as menopause and evolutionary psychologists' faddish views of "female nature," creating a sparkling, fresh vision of womanhood.


Praise For Woman: An Intimate Geography…

"...dazzling.... What you'll see through her eyes will startle and amaze you." -- Marilyn Yalom The New York Times

"The revolution already has a manifesto in the form of the ebullient Woman: An Intimate Geography. There are other female-positive books hitting the stores - but it's Angier who most decisively lifts the concept of the human female out of its traditional oxymoronic status. You gotta love a self-described female chauvinist sow who writes like Walt Whitman crossed with Erma Bombeck and depicts the vagina as a Rorschach with legs. Woman is a delicious cocktail of estrogen and amphetamine designed to pump up the ovaries as well as the cerebral cortex. " Time Magazine

"[Angier] is my kind of feminist. Unlike, say, Catherine MacKinnon, she has a sense of humor about the war between the sexes. .... It is the open-mindedness of Woman that is so beguiling. Natalie Angier encourages us to celebrate the diversity of human nature and to realize that the process of cultural evolution is only just beginning."—Erica Jong, The New York Observer

"O joy, O rapture unforeseen! Natalie Angier's fascinating book about the female body is a hilarious romp through, well, our innards. In a deliciously irreverent, energetic, and clear writing style, she demystifies and de-mythicizes women's anatomy and biological workings. Along the way, Angier leaves no metaphor unexplored....She reveals the mysterious universe of women's bodies for even the most scientifically impaired souls. Like the evolution she describes, Angier is self-selecting in what she writes about, but her passion for what make us gals tick is infectious. Her explanation of chromosomes veritably sings. Woman: An Intimate Geography will leave the reader, male or female, in sheer awe of the complexity and power of women's bodies."— Ms. Magazine

"A delightfully mischievous yet serious book on the biology of the female body. Mischievous in that the science is interpreted in terms of modern feminism. It is a great read." — Phillip Sharp, MIT professor and Nobel laureate

"A delighted and delightful book, scientifically intelligent, politically astute, and replete with the intense complexity and fascination of biology. The writing is wonderful and the humor and sensibility are as rare as they are welcome."—Perri Klass, M.D.

"Woman is so captivating I couldn't put it down. It is jam-packed with fascinating, carefully researched facts I never knew before about how we women work. Best of all, Angier's abundant sense of humor and colorful writing style make this an irresistible read for everyone interested in women's bodies and women's health."—Miriam E. Nelson, Ph.D., Strong Women Stay Young

"In this witty, learned, adventurous book, Angier gives feminism a cheerful, evolutionary twist. Her deflation of the 'new science of evolutionary psychology' is a brilliant combination of hard science, humor and common sense exactly right."—Katha Pollitt, The Nation

"Angier has brought both her considerable intellect and wry sense of humor to this book. The result is brilliantly accessible and wonderfully subversive."— Dr. Christiane Northrup, Women's Bodies, Women's Wisdom

"Having occupied a woman’s body for nearly sixty years, I didn’t think any book would have much to teach me. How wrong I was!" — Elizabeth Marshall Thomas, ethologist and author of The Hidden Life of Dogs

"Passion and intelligence meet in a gorgeous book about what it means to be a woman today, yesterday, and forever. Herein lies a fund of knowledge beautifully conveyed, as well as questions that have yet to be answered." Kirkus Reviews

"It's hard not to sound effusive about Woman: An Intimate Geography, since it's fabulous. Angier's book contains more facts about women than anything I've read since the Boston Women's Health Collective published Our Bodies, Our Selves in 1973. My advice about Woman is, get three copies, one for the beach, one for the bathroom and one to read under the covers with a flashlight." Elle

"It's exhilarating to follow Angier's subversive logic as she dismantles the misogynist mythologies once advanced as the scientific gospel of the female body and replaces them with theories more congenial with the female soul....Angier's brilliant and witty fantasia will inspire women to believe in their powwers." Boston Globe

"One knows early on one is reading a classic—a text so necessary and abundant aand truuuuue that all efforts of its kind, for decades before and after it, will be measured by it. ... After a careful reading of this essential book, men should pass it along to someone they love-—their sons, daughters ... lovers and spouses. For a fresh look into the life's sciences ... and the pure pleasure of language in service to the facts of life, Angier's Woman is as good as it gets."— Thomas Lynch, Los Angeles Times

"The chief manifesto of the new 'femaleist' thinking, this ebullient and provocative treatise on women's bodies reads like a mixture of Walt Whitman and Erma Bombeck."— Barbara Ehrenreich, TIME cover story, "The Truth About Women's Bodies"