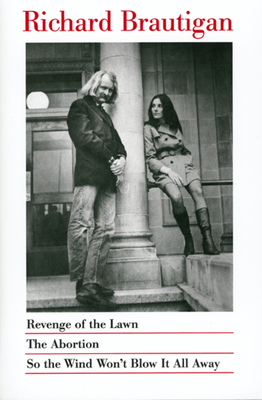 Revenge Of The Lawn, The Abortion, So The Wind Won't Blow It All Away

Three unforgettable masterpieces by Richard Brautigan, literary icon of the counter-culture movement, together in a single volume.


Revenge of the Lawn: Originally published in 1971, these bizarre flashes of insight and humor cover everything from "A High Building in Singapore" to the "Perfect California Day." This is Brautigan's only collection of stories and includes "The Lost Chapters of Trout Fishing in America."


The Abortion: An Historical Romance 1966: A public library in California where none of the books have ever been published is full of romantic possibilities. But when the librarian and his girlfriend must travel to Tijuana, they have a series of strange encounters in Brautigan's 1971 novel.

So the Wind Won't Blow It All Away: It is 1979, and a man is recalling the events of his twelfth summer, when he bought bullets for his gun instead of a hamburger. Written just before his death, and published in 1982, this novel foreshadowed Brautigan's suicide.

Richard Brautigan (1935–1984) was a god of the counterculture and the author of ten novels, nine volumes of poetry, and a collection of short stories.
Loading...
or
Not Currently Available for Direct Purchase