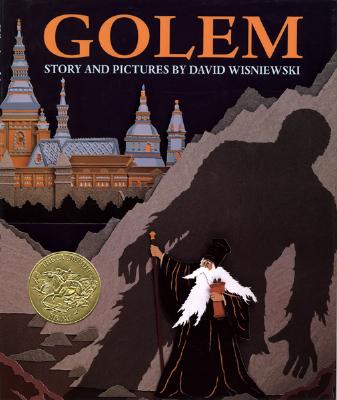 Winner of the 1997 Caldecott Medal

Retold from traditional sources and accompanied by David Wisniewski's unique cut-paper illustrations, Golem is a dramatic tale of supernatural forces invoked to save an oppressed people. It also offers a thought-provoking look at the consequences of unleashing power beyond human control. The afterword discusses the legend of the golem and its roots in the history of the Jews. A Caldecott Medal Book.

"The cut-paper collages are exquisitely produced and exceedingly dramatic. There is menace and majesty in Wisniewski's use of color, and he finds atmosphere and terror in a scissor's stroke. A fact-filled final note concludes this mesmerizing book." Kirkus Reviews with Pointers

David Wisniewski (wiz-NESS-key) was born in Middlesex, England, in 1953. After training at Ringling Brothers and Barnum & Bailey Clown College, he spent three years as a clown, designing and constructing his own props, costumes, and gags. He was subsequently hired by his future wife, Donna, as a performer with a traveling puppet theatre. Married six months later, the Wisniewskis started their own troupe, Clarion Shadow Theatre, specializing in shadow puppetry. In the course of creating the plays, puppets, and projected scenery, Mr. Wisniewski evolved the storytelling techniques and art skills that eventually led to his picture books with their unique cut-paper illustrations. His retelling of GOLEM was awarded the 1997 Caldecott Medal. David Wisniewski died in 2002 in the Maryland home he shared with his wife and two children.
Loading...
or
Not Currently Available for Direct Purchase