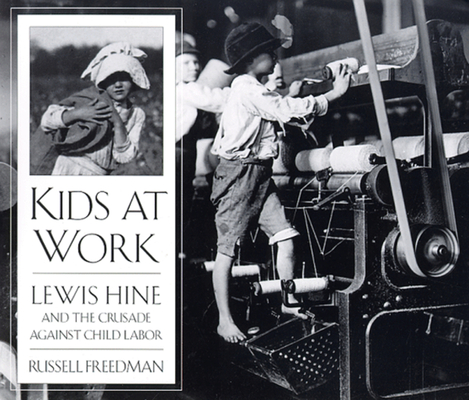 Lewis Hine and the Crusade Against Child Labor

Photobiography of early twentieth-century photographer and schoolteacher Lewis Hine, using his own work as illustrations. Hines's photographs of children at work were so devastating that they convinced the American people that Congress must pass child labor laws.


Praise For Kids at Work: Lewis Hine and the Crusade Against Child Labor…

"In 1908 Lewis Hine left his teaching position for a full-time job as an investigative photographer for the National Child Labor Committee, then conducting a major campaign against the exploitation of children. Hine's photographs serve as a visual accompaniment to Freedman's narrative, which not only documents the abuses of the times but also traces the chronology of Hine's development as a crusader." — Horn Book Magazine

"Readers will not only come to appreciate the impact of his groundbreaking work, but will also learn how one man dedicated and developed his skill and talents to bring about social reform." — School Library Journal (starred review)

Russell Freedman (1929-2018) received the Newbery Medal for Lincoln: A Photobiography. He was the recipient of three Newbery Honors, a National Humanities Medal, the Sibert Medal, the Orbis Pictus Award, and the Laura Ingalls Wilder Award, and was selected to give the 2006 May Hill Arbuthnot Honor Lecture. Mr. Freedman lived in New York City and traveled widely to research his books.
Loading...
or support indie stores by buying on
(This book is on backorder)