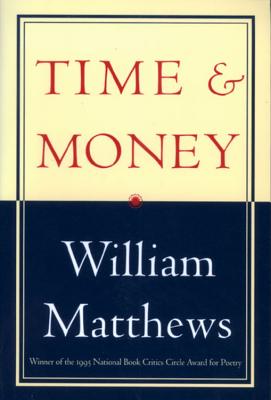 William Matthews's ten books have gradually earned him a place on the first roster of American poets -" as water licks its steady way through stone." " Very little of the poetry of the past twenty years," Henry Taylor has written in the Washington Times, " is more intelligent and engaging than that of William Matthews . .. Admiring gratitude seems perfectly appropriate." The New Yorker has described Matthews's work as " poems that revel in etymology and delight in colloquialism." And Carol Muske, in The Nation, has added: " If asked, I couldn't come up with a poet more in tune with the ironies and stand-up vernacular, the jazz of the everyday, than William Matthews . . . Matthews is a wise and fine poet and a funny person. Like time and money, an unbeatable combination. " This is a large-hearted book, a strong and worldly book, the work of five years by one of the most admired and generous of American poets. The National Book Critics Circle named it the winner of its 1995 award in poet

"his new work is inlaid with an even deeper vein of irony and shaped by an even surer command of language,..." Booklist, ALA

"It is a meditation on loss and grace that some of us will be thinking about for a long time." Amazon.com

William Matthews won the National Book Critics Circle Award in 1995 and the Ruth Lilly Award of the Modern Poetry Association in 1997. Born in Cincinnati in 1942, he was educated at Yale University and the University of North Carolina. At the time of his death in 1997, he was a professor of English and director of the writing program at the City University of New York.
Loading...
or support indie stores by buying on