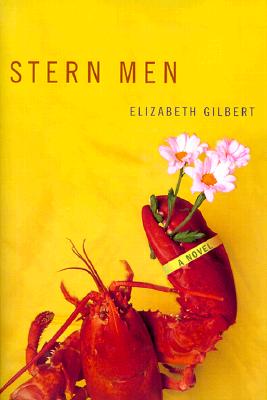 In this big, wise, funny first novel from a PEN/Hemingway Award finalist, a resilient young woman brings an end to an age-old fishing feud. Elizabeth Gilbert's debut collection, PILGRIMS, was hailed as "a superior collection of stories about women who are as tough as they look, though perhaps not quite as tough as they think they are" (Glamour). Stern Men brings us Gilbert's toughest, smartest, most lovable heroine yet.
On two remote islands off the coast of Maine, the local lobstermen have fought savagely for generations over the fishing rights to the ocean waters between them. Young Ruth Thomas is born into this feud, a daughter of Fort Niles destined to be at war with the men of Courne Haven. Eighteen years old, smart as a whip, irredeemably unromantic, Ruth returns home from boarding school determined to throw her education overboard and join the "stern men" who work the lobster boats. She is certain of one thing: she will not surrender control of her life to the wealthy Ellis family, which has always had a sinister hold over the island. On her side are Fort Niles's eccentric residents: the lovable Mrs. Pommeroy and her various deadbeat sons; sweet old Senator Simon, on a mission to dig up shipwreck treasure; and Simon's twin brother, Angus Addams, the most ruthless lobsterman alive.
The feud between the islands escalates daily -- until Ruth gets a glimpse of Owney Wishnell, a silent young Courne Haven Adonis with a prenatural gift for catching lobsters. Their passion is fast, furious, and forbidden. Their only hope is an unlikely truce.
For readers who love the work of John Irving, STERN MEN is a comedy that is as smart and finely crafted as it is entertaining. STERN MEN captures a particular American spirit with on-the-mark dialogue and a fine funny touch that pierces our notions of commerce and class. This is a large-canvas novel with a heroine destined for greatness in spite of herself.

"Gilbert's tangy language has as much music as muscle; the novel is Emersonian in its clarity and Austenian in its sly social observation." Mirabella