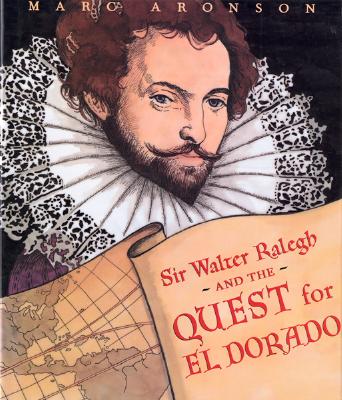 Sir Walter Ralegh and the Quest for El Dorado (Hardcover)

In this extraordinarily well researched and insightful biography, Marc Aronson explores the amazing accomplishments and dismal failures of one of the most flamboyant figures of the Elizabethan age. Best remembered for laying his coat in a muddy puddle so that Queen Elizabeth I could walk across it, Sir Walter Ralegh committed himself to pleasing his monarch and obtaining power in her court. He heroically risked his life in battle time and again, chasing after glory to win her favor. His notoriously ill-fated quest for the mythological golden city of El Dorado was perhaps his grandest attempt, but it also was his undoing, and Ralegh ultimately paid for his mistakes with his life. Despite his shortcomings, he was not only charismatic and brave, he was brilliant as well, and his contributions to the New World and to western culture as a whole were vast and enduring. MAPS, ENDNOTES and BIBLIOGRAPHY, TIMELINE, INDEX.

Marc Aronson is the award-winning author of a wide variety of nonfiction works for younger readers, including Sugar Changed the World and Sir Walter Ralegh and the Quest for El Dorado, which received the first Robert F. Sibert Informational Book Award. He edits and publishes young adult fiction in a special arrangement with Candlewick and lives with his wife and two sons in Maplewood, New Jersey. Visit him at marcaronson.com.

Praise For Sir Walter Ralegh and the Quest for El Dorado…

"The book is beutifully researched and written with wit and passion. Sweeping, multilayered nonfiction." Booklist, ALA, Starred Review

"This title is at once lively, accessible, and challenging." The Bulletin of the Center for Children's Books

"provacative and tantalizing, revealing his subject as a person of canny wit and magnetism with all-too-human shortcomings" Publishers Weekly, Starred

"Reader's will be as riveted by [Aronson's] strong, dramatic writing as they are enlightened by his wide-ranging analyses." Kirkus Reviews

"For some it will be a reference source. For history lovers, it will be recreational reading." Children's Book Review Service
or
Not Currently Available for Direct Purchase
Copyright © 2020 American Booksellers Association