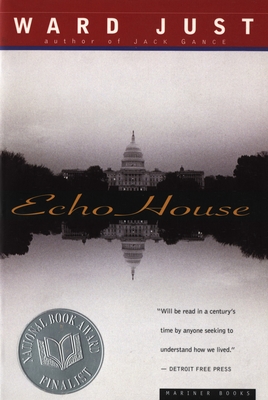 A FINALIST FOR THE NATIONAL BOOK AWARD
“Will be read in a century’s time be anyone seeking to understand how we lived.”—Detroit Free Press
“A master American novelist.” —Vanity Fair

An epic chronicle of three generations of Washington power brokers and the women who loved them (except when they didn't), Echo House is Ward Just's masterpiece. The Washington Post described it as "a fascinating if ultimately painful fairy tale, complete with a family curse. The decline of the Behls represents the decline of Washington from the bright dawn of the American century into the gathering shadows of an alien new millennium."

“One of the most astute writers of American fiction.”—New York Times Book Review

“Masterpieces of balance, focus, and hidden order…his stories put him in the category reserved for writers work far beyond the fashions of the times.”—Chicago Tribune

“He has earned a place on the shelf just below Edith Wharton and Henry James.”—Newsweek

WARD JUST (1935-2019) was the author of nineteen novels, including Exiles in the Garden, Forgetfulness, the National Book Award finalist Echo House, A Dangerous Friend, winner of the Cooper Prize for fiction from the Society of American Historians, and An Unfinished Season, winner of the Chicago Tribune Heartland Award and a finalist for the 2005 Pulitzer Prize.
Loading...
or support indie stores by buying on