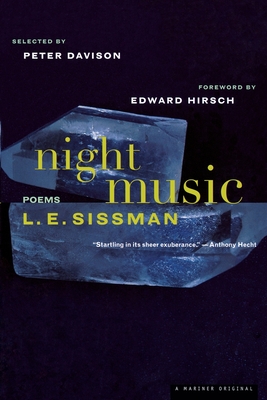 Selected by Peter Davison with an introduction by Edward Hirsch. Sissman was a true phenomenon in American poetry. He published his first book, a collection of antic, autobiographical episodes in blank verse, in 1968. Eight years and three books later, he died of Hodgkin's disease at the age of forty-eight. Of Sissman's remarkable final poems John Updike wrote, "What other poet had ever given such wry and unblinking witness to his own dying? His poetry gave back to life more generously than he had received, and carried his beautiful wit into darkness undimmed." Now Sissman's longtime editor, Peter Davison, has selected from his lifework the essential poems--the essence of an American original. (A Mariner Original)

EDWARD HIRSCH is a celebrated poet and peerless advocate for poetry. A MacArthur fellow, he has published ten books of poems and six books of prose. He has received numerous awards and fellowships, including a National Endowment for the Arts Fellowship, the Rome Prize, a Pablo Neruda Presidential Medal of Honor, and the American Academy of Arts and Letters Award for literature. He serves as president of the John Simon Guggenheim Memorial Foundation and lives in Brooklyn.