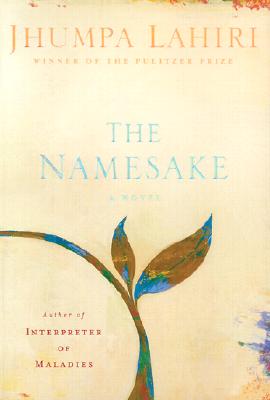 Jhumpa Lahiri's Interpreter of Maladies established this young writer as one the most brilliant of her generation. Her stories are one of the very few debut works -- and only a handful of collections -- to have won the Pulitzer Prize for fiction. Among the many other awards and honors it received were the New Yorker Debut of the Year award, the PEN/Hemingway Award, and the highest critical praise for its grace, acuity, and compassion in detailing lives transported from India to America. In The Namesake, Lahiri enriches the themes that made her collection an international bestseller: the immigrant experience, the clash of cultures, the conflicts of assimilation, and, most poignantly, the tangled ties between generations. Here again Lahiri displays her deft touch for the perfect detail -- the fleeting moment, the turn of phrase -- that opens whole worlds of emotion.
The Namesake takes the Ganguli family from their tradition-bound life in Calcutta through their fraught transformation into Americans. On the heels of their arranged wedding, Ashoke and Ashima Ganguli settle together in Cambridge, Massachusetts. An engineer by training, Ashoke adapts far less warily than his wife, who resists all things American and pines for her family. When their son is born, the task of naming him betrays the vexed results of bringing old ways to the new world. Named for a Russian writer by his Indian parents in memory of a catastrophe years before, Gogol Ganguli knows only that he suffers the burden of his heritage as well as his odd, antic name. Lahiri brings great empathy to Gogol as he stumbles along the first-generation path, strewn with conflicting loyalties, comic detours, and wrenching love affairs. With penetrating insight, she reveals not only the defining power of the names and expectations bestowed upon us by our parents, but also the means by which we slowly, sometimes painfully, come to define ourselves. The New York Times has praised Lahiri as "a writer of uncommon elegance and poise." The Namesake is a fine-tuned, intimate, and deeply felt novel of identity.


Praise For The Namesake…

This poignant treatment of the immigrant experience is a rich, stimulating fusion of authentic emotion, ironic observation, and revealing details.
Library Journal

Lahiri weaves an intricate story of ... an Indian family in America. Their bumpy journey to self-acceptance will move you.
Marie Claire

[Lahiri] weaves an authentic tale of a Bengali family in Boston... [which] powerfully depicts the universal pull of family traditions.
Lifetime

The casual beauty of the writing keeps the pages turning.
Elle

A debut novel that is as assured and eloquent as the work of a longtime master of the craft.
The New York Times

Lahiri is insightful on the complexities of foreignness.
Boston Magazine

In the world of literature, Lahiri writes like a native.
The San Francisco Chronicle

generous, exacting portrait of the clash between cultural dictates and one man's heart.
Boston Globe

Astringent and clear-eyed in thought, vivid in its portraiture, attuned to American particulars and universal yearnings...memorable fiction.
Newsday

[Lahiri's] writing is assured and patient, inspiring immediate confidence that we are in trustworthy hands.
The Los Angeles Times

A fine novel from a superb writer The Washington Post

A debut novel that triumphs in its breadth and mastery.
Star Ledger

The novel not only proves the author's ease with the longer form but clearly demonstrates her artistic sensibility.
News and Observer

...an accomplished novelist of the first rank, to whose further work we can look forward with confidence and excitement The San Diego Union-Tribune

...simple yet richly detailed writing that makes the heart ache as [Lahiri] meticulously unfolds the lives of her characters.
USA Today

A book to savor, certainly one of the best of the year.
Atlanta Journal Constitution

...one of the best works of fiction published this year.
The Seattle Times

a fascinating journey of self-discovery.
The Miami Herald

[The Namesake] speaks to the universal struggle to extricate ourselves from the past.
Seattle Post-Intelligencer

...in this second book Lahiri's pace and accent are unmistakable: somber, unrushed, acute in the exposure they offer to life's injuries and to its inroads of hope.
The Nation

Lahiri more than fulfills the promise of [her] auspicious debut.
Orlando Sentinel

...validates all the accolades she's received to date and beckons for more. St. Petersburg Times

Against all that is irrational and inevitable about life, Lahiri posits the timeless, borderless eloquence and permanence of great writing. Pittsburg Post Gazette

The Namesake opens with Ashima Ganguli trying to make a spicy Indian snack from American ingredients — Rice Krispies and Planters peanuts — but “as usual, there’s something missing.” How does Ashima try and make over her home in Cambridge to remind her of what she’s left behind in Calcutta? Throughout The Namesake, how does Jhumpa Lahiri use food and clothing to explore cultural transitions — especially through rituals, like the annaprasan, the rice ceremony? Some readers have said that Lahiri’s writing makes them crave the meals she evokes so beautifully. What memories or desires does Lahiri bring up for you? Does her writing ever make you “hunger”?

The title The Namesake reflects the struggles Gogol Ganguli goes through to identify with his unusual names. How does Gogol lose first his public name, his bhalonam, and then his private pet name, his daknam? How does he try to remake his identity, after choosing to rename himself, and what is the result? How do our names precede us in society, and how do they define us? Do you have a pet name, or a secret name — and has that name ever become publicly known? Do different people call you by different names? Did you ever wish for a new name? How are names chosen in your family?

Newsweek said of Lahiri’s Pulitzer Prize–winning collection of short stories, Interpreter of Maladies, “Jhumpa Lahiri writes such direct, translucent prose you almost forget you’re reading.” The Namesake is also subtle in style, elegant, and realistically paced. How are the events of the novel simultaneously dramatic and commonplace? What details made the characters real to you? Did you ever lose yourself in the story?

When Gogol is born, the Gangulis meet other Bengali families with small children, and Ashima finds that with a new baby “perfect strangers, all Americans, suddenly take notice of her, smiling, congratulating her for what she’s done.” How, for all of us, do children change our place in the community, and what we expect from it? Have you ever connected with someone you may have otherwise never spoken to — of a different ethnic background or economic class — through his children or your own?

In his youth, Ashoke Ganguli is saved from a massive train wreck in India. When his son, Gogol, is born, Ashoke thinks, “Being rescued from that shattered train had been the first miracle of his life. But here, now, reposing in his arms, weighing next to nothing but changing everything, is the second.” Is Ashoke’s love for his family more poignant because of his brush with death? Why do you think he hides his past from Gogol? What moments define us more — accidents or achievements, mourning or celebration?

Lahiri has said, “The question of identity is always a difficult one, but especially for those who are culturally displaced, as immigrants are . . . who grow up in two worlds simultaneously.” What do you think Gogol wants most from his life? How is it different from what his family wants for him, and what they wanted when they first came to America to start a family? How have expectations changed between generations in your own family? Do you want something different for your own children from what your parents wanted for you?

The marriage of Ashima and Ashoke is arranged by their families. The closest intimacy they share before their wedding is when Ashima steps briefly, secretly, into Ashoke’s shoes. Gogol’s romantic encounters are very different from what his parents experienced or expected for their son. What draws Gogol to his many lovers, especially to Ruth, Maxine, and eventually Moushumi? What draws them to him? From where do you think we take our notions of romantic love — from our family and friends, or from society and the media? How much does your cultural heritage define your ideas and experience of love?

Lahiri explores in several ways the difficulty of reconciling cross-cultural rituals around death and dying. For instance, Ashima refuses to display the rubbings of gravestones young Gogol makes with his classmates. And when Gogol’s father suddenly dies, Gogol’s relationship with Maxine is strained and quickly ends. Why do you think their love affair can’t survive Gogol’s grief? How does the loss of Gogol’s father turn him back toward his family? How does it also change Sonia and Ashima’s relationship?

Did you find the ending of The Namesake surprising? What did you expect from Moushumi and Gogol’s marriage? Do you think Moushumi is entirely to blame for her infidelity? Is Gogol a victim at the end of the book? In the last few pages of The Namesake, Gogol begins to read “The Overcoat” for the first time — the book his father gave him, by his “namesake.” Where do you imagine Gogol will go from here?