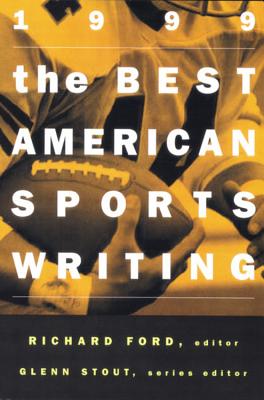 Well established as the premier sports anthology, The Best American Sports Writing embraces the world of sports in all its drama, humanity, and excitement. This year's illustrious contributors join the ranks of such celebrated writers as George Plimpton, David Remnick, and David Halberstam. Their exceptional talent and experience continue the series' tradition of excellence, which prompted the Boston Globe to hail it as a "venerable institution".

"Through various incarnations, several "Best of" sportswriting collections have effectively mirrored the major sporting events of much of the American century. The present series' latest volume presents some of last year's expected characters (the heroic face-off between McGuire and Sosa), but what makes this anthology so interesting is the coverage given to nonspectator and minor sports by this year's guest editor, novelist Ford. In addition to the expected baseball and football pieces, there are a number of stories on hunting and fishing and an editorial leaning toward remaking spectating when it comes to sports. The contributors include John McPhee, Adam Gopnik, David Mamet, and Jonathan Miles. In the early days of sportswriting collections, many, if not all, of the selections were drawn from daily newspapers. The changing face of journalism is evident in this collection as only three of the 17 stories came from the daily press. There is one constant, however. Shirley Povich, a Washington Post sports writer and editor who began in the 1920s, had on of his stories selected from the work of the last year of his life. With a memorable introductory essay by Ford, this anthology is recommended for sports collection in school and public libraries" -- William O. Scheeren, Hempfield Area H.S. Lib., Greensburg, PA Library Journal

"Articles from The New Yorker, GQ, Sports Illustrated, Outside, Vanity Fair, The Washington Post, and other noted publications, chronicling every major (and some minor) sport, fill the pages of this very worthwhile collection. Roger Angell reports on baseball; Frank Deford investigates women's tennis; Karen Karbo spends a day with an all-female crew in pursuit of the America's Cup. The range is wide, and the writing is, as the cover says, the best." Amazon.com