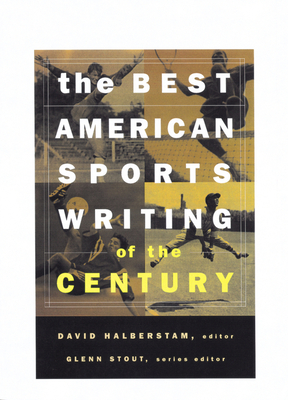 The Best American Sports Writing of the Century showcases the best sports journalists of the twentieth century, from Jimmy Cannon, Red Smith, William Mack, Gary Smith, and Frank Deford to A. J. Liebling, Tom Wolfe, and Hunter S. Thompson, and includes such classics as "What Do You Think of Ted Williams Now?" by Richard Ben Cramer, "Louis Knocks Out Schmeling" by Bob Considine, and "The Rocky Road of Pistol Pete" by W. C. Heinz. This outstanding collection captures not only the century's greatest moments in baseball, boxing, horseracing, golf, and tennis, but some of the finest writing of our time. Guest editor David Halberstam is the author of The Reckoning, The Summer of Forty-Nine, The Breaks of the Game, and The Children. Series editor Glenn Stout has written biographies of Joe DiMaggio, Ted Williams, and Jackie Robinson.

David Halberstam is the author of The Reckoning, The Summer of Forty-Nine, The Children, and Playing for Keeps: Michael Jordan and the World He Made.

"...there is much to surprise and delight the sports reader among the 59 pieces here." Boston Globe

"Making the choices for the annual edition of this series is daunting enough; picking the century's best seems impossible. However, what's here is universally excellent. There's late Chicagoan Mike Royko's jingoistic review of a book by a reviled New York Met; Al Stump's now-infamous, still disturbing account of baseball legend Ty Cobb's last days; Gay Talese's revealing mid-sixties profile of recently deceased icon Joe DiMaggio; and a 1975 remembrance of Casey Stengel by Wells Twombly that reveals more about the baseball manager than a half-dozen biographies. Other highlights include Hunter S. Thompson's predictably outrageous take on the Kentucky Derby; an insightful portrait of boxer Billy Conn by Frank Deford; and Jimmy Breslin's 1960 profile of jockey Billy Hartack. In addition, a section on Muhammad Ali offers some great writing by Dick Schaap, Murray Kempton, Norman Mailer, Jim Murray, and Davis Miller. Biographical sketches of each contributor as well as a list of the century's other notable sportswriters are included. This wonderful, delightfully eclectic volume is a must for every library." Booklist, ALA

"People who love sports...will have more fun with The Best American Sports Writing of the Century than anyone is supposed to have with a book." -- Bill Littlefield, host of NPR's "Only a Game" The Los Angeles Times

"...a strong collection that will send readers on a captivating trip through the diversity of styles and subjects that developed as sports became big business and big news." Publishers Weekly

"This book...gives a lot of pleasure." Library Journal

"Given the overall vigor and volume of sports writing in America throughout the 20th century, the idea of compiling a single collection dubbed the "best" requires a daring balancing act of boldness and delicacy. And that's just what it is. Sports fans--but why limit this sparkling, spirited, passionate prose to just sports fans?--will revel in the equilibrium of David Halberstam's and Glenn Stout's wide range of selections..." Amazon.com

"For those who love sports, and care about good writing, this is your collection." The Seattle Times

"[The Best American Sports Writing of the Century] demonstrates in a single, very large volume that sports writing is often much more than a trade for arrested adolescents. It has room, too, for poets and wits, for sharp-eyed reporters and world-weary wise men, for gifted stylists with a keen sense of the way we lived then and the way we live now. A lot of this stuff is as good as nonfiction writing ever gets." Fortune

"At last, the predictable millennial/centennial summing-up--our understandable urge to quantify human experience into silly best-of listings now that the end is near--has produced something of value. I speak, naturally, of The Best American Sports Writing of the Century." The Las Vegas Sun

"...[a] dazzling collection of writings." The Houston Chronicle

"David Halberstam has done yeoman work in collecting The Best American Sports Writing of the Century, and anyone who loves the American idiom should clear space on his bookshelf for this anthology...The book, in short, is a winner." American Way

"All the entries in this oversize volume are choice." Boston Magazine

"...an anthology that can be savored like a hole in one." Playboy

"Make room on your bookshelf for this anthology. It isn't necessary to be a sports enthusiast. Anyone interested in the popular culture of America since the turn of the century is likely to treasure it." Buffalo News
or
Buy Here
Copyright © 2020 American Booksellers Association