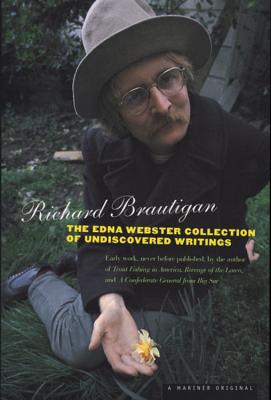 On the eve of his departure from Eugene, Oregon, to San Francisco and worldly success, a twenty-one-year-old unpublished writer named Richard Brautigan gave these funny, buoyant stories and poems as a gift to Edna Webster, the beloved mother of both his best friend and his first "real" girlfriend. "When I am rich and famous, Edna," he told her, "this will be your social security.' The stories and poems show Brautigan as hopelessly lovestruck, cheerily goofy, and at his most disarmingly innocent. We see not only a young man and young artist about to bloom, but also the whole literary sensibility of the 1960s counterculture about to spread its wings and fly.

Praise For The Edna Webster Collection of Undiscovered Writing…

"Here and there, in poems such as `the unknown dreamer' and `all the cities at once,' the bright promise of better things to come shines through like diamonds among the treacle. " -- REVIEWED BY William Hjortsberg The San Francisco Chronicle

"These early poems reveal the young Brautigan-in-formation tinkering with metaphor and trying on styles--a Beat knockoff here, a stab at Hemingway there. But they also reveal that Brautigan's peculiar comic collision of literary allusion, morbid drama and colloquial speech was already his own." Los Angeles Weekly

Richard Brautigan (1935–1984) was a god of the counterculture and the author of ten novels, nine volumes of poetry, and a collection of short stories.
Loading...
or support indie stores by buying on