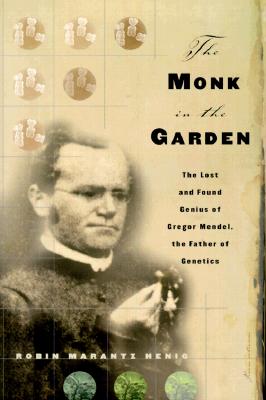 The Monk in the Garden

The Lost and Found Genius of Gregor Mendel, the Father of Genetics

Most people know that Gregor Mendel, the Moravian monk who patiently grew his peas in a monastery garden, shaped our understanding of inheritance. But people might not know that Mendel's work was ignored in his own lifetime, even though it contained answers to the most pressing questions raised by Charles Darwin's revolutionary book, ON ORIGIN OF THE SPECIES, published only a few years earlier. Mendel's single chance of recognition failed utterly, and he died a lonely and disappointed man. Thirty-five years later, his work was rescued from obscurity in a single season, the spring of 1900, when three scientists from three different countries nearly simultaneously dusted off Mendel's groundbreaking paper and finally recognized its profound significance. The perplexing silence that greeted Mendel's discovery and his ultimate canonization as the father of genetics make up a tale of intrigue, jealousy, and a healthy dose of bad timing. Telling the story as it has never been told before, Robin Henig crafts a suspenseful, elegant, and richly detailed narrative that fully evokes Mendel's life and work and the fate of his ideas as they made their perilous way toward the light of day. THE MONK IN THE GARDEN is a literary tour de force about a little-known chapter in the history of science, and it brings us back to the birth of genetics - a field that continues to challenge the way we think about life itself.


Praise For The Monk in the Garden: The Lost and Found Genius of Gregor Mendel, the Father of Genetics…

"Old agonies are brought vividly to life in Robin Henig's lucid account of genetics' origins. From the quiet of a monastery garden to the turmoil of public debate she gives us a thrilling portrait of the pioneers who started us on the path to cloning and genetic modification. How refreshing to read an account of the real issues rather the popular myths that surround Mendel and his legacy - and to enable us to understand the roots of the science that is going to change our lives in the twenty-first century." -- Simon Mawer, author of MENDEL'S DWARF