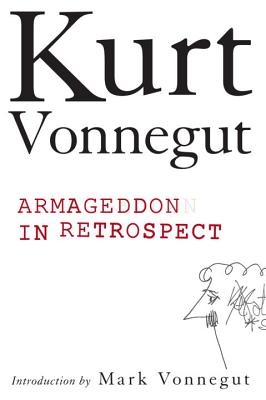 And Other New and Unpublished Writings on War and Peace

View our feature on Kurt Vonnegut's Armageddon in Retrospect.

Published on the first anniversary of Kurt Vonnegut's death in April 2007, Armageddon in Retrospect is a collection of twelve new and unpublished writings on war and peace. Written with Vonnegut's trademark rueful humor, the pieces range from a visceral nonfiction recollection of the destruction of Dresden during World War II-a piece that is as timely today as it was then-to a painfully funny story about three privates and their fantasies of the perfect first meal upon returning home from war; to a darker and more poignant story about the impossibility of shielding our children from the temptations of violence. This is a volume that says as much about the times in which we live as it does about the genius of the man who wrote it. Also included here is Vonnegut's last speech, as well as an assortment of his drawings, and an introduction by the author's son, Mark Vonnegut.

Kurt Vonnegut, one of the most acclaimed American writers of the past century, died in New York City on April 11, 2007. He was the "New York Times" bestselling author of fourteen novels, including such literary classics as "Slaughterhouse-Five," "Cat s Cradle" and "God Bless You, Mr. Rosewater." Penguin Group (USA) was fortunate to publish several of Mr. Vonnegut s books, including the novels "Timequake" and "Hocus Pocus" as well as a collection of short fiction, "Bagombo Snuff Box.""
or
Not Currently Available for Direct Purchase
Copyright © 2020 American Booksellers Association