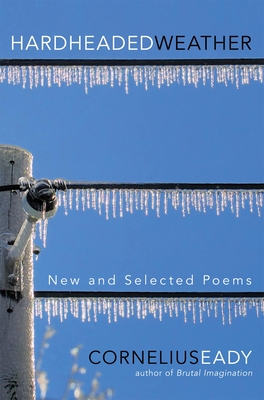 From Cornelius Eady, one of America's most engaging voices, comes an exciting collection of poetry that at once delineates the arc of the poet's universe and highlights the range of his considerable talents.

Cornelius Eady’s poems show him in full control of his considerable talents and displaying a rich maturity as he enters midlife. His poems are sly, unsentimental, and witty, full of truths that are intimate and profound.

Hardheaded Weather ranges widely, reflecting the new found responsibilities Eady has assumed as he transitions from urban renter to nonplussed rural homeowner, as well as the sobering influence of war and the intimation of his own mortality. Yet even at his angriest, the poet has always had a depth of compassion rare in our polarized age, with a sense of humor that is both sophisticated and demotic. These poems will resonate deeply.

As exciting as the new poems are, his selected earlier poems dazzle, too, as they demonstrate the arc of Cornelius Eady’s maturation and the originality of his voice. Taken together, Hardheaded Weather forms a moving—and sometimes searing—testament to the power of poetry.

“This collection of both new and previously published poems showcases Eady's enormous range as a chronicler of contemporary American life, class, race, family, gender, jazz and blues, and the distinctions between urban and rural environments all play a role in these impeccable lyrics. Eady's plain-spoken, pragmatic voice is accessible yet distinct, and the experiences he describes (being a victim of discrimination, watching a tough-minded father die, surviving prostate cancer) manage to seem both intimate and universal.”—The New Yorker

“The widely respected poet and teacher, founder (with Toi Derricotte) of the Cave Canem poetry workshop, follows up his last collection, a finalist for the National Book Award, with new work reflecting on advancing middle age and his sometimes jarring transition from urban to rural dweller. The selected work spans the past seven years and joyously sheds new light on some long out-of- print material.”—The Washington Post

“This first career-spanning selection confirms Eady as a likable, if self-conscious, poet of uncommon variety, with a gift for the spoken vernacular....This is a fine introduction to Eady's worthy oeuvre.”—Publishers Weekly

Cornelius Eady is an American poet. His honors include the Prairie Schooner Strousse Award, a Lila Wallace-Reader’s Digest Award, and fellowships from the Guggenheim Foundation, the National Endowment for the Arts, and the Rockefeller Foundation. He has served as director of the Poetry Center at the State University of New York at Stonybrook, and has taught at Sarah Lawrence College, New York University, City College of New York, The Writer’s Voice, The College of William and Mary, and Sweet Briar College. The author of six previous volumes, he currently lives in Columbia, MO, where he holds the Miller Chair in Poetry at University of Missouri.
Loading...
or
Not Currently Available for Direct Purchase