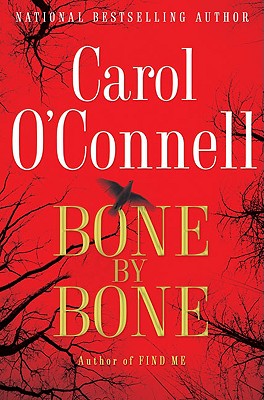 “Carol O'Connell's first stand-alone book is a winner -- an intricately plotted story of an unsolved murder of a teenage boy. This extraordinary thriller will keep you hooked.”
— Patricia Worth, River Reader LLC, Lexington, MO
View the List

A stunning stand-alone novel from the national-bestselling author who "has raised the standard for psychological thrillers" (Chicago Tribune).

Carol O'Connell's most recent Mallory novel, Find Me, was one of the most highly praised suspense novels of the year. "A terrific find: a tightly wrapped, expert combination of suspense, mystery and show-stopping character" (Janet Maslin of The New York Times); "yet another example of the spot-on talents of one of America's finest writers of mysteries" (Milwaukee Journal Sentinel). In Bone by Bone, however, she may have written her most unforgettable novel yet.

In the northern California town of Coventry, two teenage brothers go into the woods one day, but only one comes back. No one knows what happened to the younger brother, Josh, until twenty years later, when the older brother, Oren, now an ex-investigator for the Army CID, returns to Coventry for the first time in many years. His first morning back, he hears a thump on the front porch. Lying in front of the door is a human jawbone, the teeth still intact. And it is not the first such object, his father tells him. Other remains have been left there as well. Josh is coming home . . . bone by bone.

Using all his investigative skills, Oren sets out to solve the mystery of his brother's murder, but Coventry is a town full of secrets and secret-keepers: the housekeeper with the fugitive past, the deputy with the old grudge, the reclusive ex-cop from L.A., the woman with the title of town monster, and, not least of all, Oren himself. But the greatest secret of all belonged to his brother, and it is only by unraveling it that Oren can begin to discover the truth that has haunted them all for twenty years.

Written with the rich prose, resonant characters, and knife-edge suspense that have won the author so many fans, Bone by Bone is further proof that "O'Connell is one of the most poetic yet tough-minded writers of the genre" (San Francisco Chronicle).