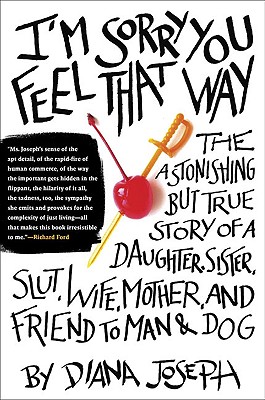 I'm Sorry You Feel That Way

The Astonishing but True Story of a Daughter, Sister, Slut,Wife, Mother, andFriend to Man and Dog

“Diana Joseph has never chosen the path of least resistance, or the straight and narrow. She writes of her mistakes with candor, no regret, and a wry sense of humor that will resonate with all of us who has grown up to find that things haven't turned out the way we had imagined it. One couldn't ask for a better traveling companion.”
— Lyn Roberts, Square Books, Oxford, MS
View the List

Meet the men in Diana Joseph's life: "The boy," Diana's fourteen-year-old son, who supports the NRA and dreams of living in a house with wall-to-wall carpeting; Diana's father, who's called her on the telephone twice, ever, and who sat her down when she was twelve to caution her against becoming a slut (she didn't listen); Diana's brothers, or, as her father calls them, "the two assholes"; Diana's ex-husband, a lumberjack with three ex-wives, yet he's still the first one she calls when she's in a jam; and Diana's common-law husband, Al, an English professor who's been mistakenly called mentally challenged. Ostensibly organized around the various men in Diana's life, this is really a memoir about what it's like to be a modern, smart woman making her way in the world.

Diana Joseph has worked as a waitress, a short-order cook, a typist, and a teacher. Her essay "The Boy" won the Kentucky Women Writers Prize for Creative Nonfiction. Joseph currently teaches in the MFA program at Minnesota State University, Mankato.
Loading...
or
Not Currently Available for Direct Purchase