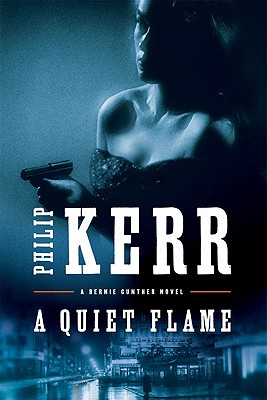 Philip Kerr returns with his best-loved character, Bernie Gunther, in the fifth novel in what is now a series: a tight, twisting, compelling thriller that is firmly rooted in history.
A "Quiet Flame" opens in 1950. Falsely fingered a war criminal, Bernie Gunther has booked passage to Buenos Aires, lured, like the Nazis whose company he has always despised, by promises of a new life and a clean passport from the Peron government. But Bernie doesn't have the luxury of settling into his new home and lying low. He is soon pressured by the local police into taking on a case in which a girl has turned up dead, gruesomely mutilated, and another?the daughter of a wealthy German banker?has gone missing. Both crimes seem to connect to an unsolved case Bernie worked on back in Berlin in 1932. It's not so far-fetched that the cases might be linked: after all, the scum of the earth has been washing up on Argentine shores?state-licensed murderers and torturers?so why couldn't a serial killer be among them?
But Argentina, just like Germany, holds terrible secrets within its corrupt halls of power. When beautiful Anna Yagubsky seeks Gunther out, desperate for help, to find out what happened to her Jewish aunt and uncle who have disappeared, he is drawn into a horror story that rivals everything he has tried so hard to leave behind half a world away.
In this new postwar world, Bernie Gunther is a man without a name or a country, but still in full possession of his conscience. He is ?the right kind of hero for his time?and ours.? (Marilyn Stasio, "The New York Times Book Review")

Philip Kerr is the author of many novels, but perhaps most important are the five featuring Bernie Gunther"A Quiet Flame," "The One from the Other," and the Berlin Noir trilogy ("March Violets," "The Pale Criminal," and "A German Requiem"). He lives in London and Cornwall, England, with his family."