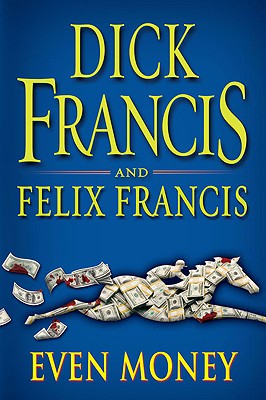 O n the first day of Royal Ascot, the world's most famous horse race, the crowd rejoices in a string of winning favorites. Ned Talbot has worked all his life as a bookmaker- taking over the family business from his grandfather- so he knows not to expect any sympathy from the punters as they count their winnings, and he his losses. He's seen the ups and downs before-but, as the big gambling conglomerates muscle in on small concerns like his, Ned wonders if it's worth it any more.

When a gray-haired man steps forward from the crowd claiming to be his father, Ned's life is thrown into far deeper turmoil. He'd been told since he was a baby that his parents had died in a car crash.

Barely an hour later, his newly found father is stabbed by an unknown assailant in the Ascot parking lot. Blood oozing from his abdomen, his father warns Ned to "be very careful." But of whom? Of what? Ned finds himself in a race to solve his father's riddle-a race where coming in second could cost him more than even money-it could cost him his life. . . .

Dick Francis (pictured with his son Felix Francis) was born in South Wales in 1920. He was a young rider of distinction winning awards and trophies at horse shows throughout the United Kingdom. At the outbreak of World War II he joined the Royal Air Force as a pilot, flying fighter and bomber aircraft including the Spitfire and Lancaster.He became one of the most successful postwar steeplechase jockeys, winning more than 350 races and riding for Her Majesty Queen Elizabeth, the Queen Mother. After his retirement from the saddle in 1957, he published an autobiography, "The Sport of Queens," before going on to write more than forty acclaimed books, including the "New York Times" bestsellers "Even Money" and "Silks."A three-time Edgar Award winner, he also received the prestigious Crime Writers' Association's Cartier Diamond Dagger, was named Grand Master by the Mystery Writers of America, and was awarded a CBE in the Queen's Birthday Honours List in 2000. He died in February 2010, at age eighty-nine, and remains among the greatest thriller writers of all time.

Felix Francis (pictured with his father, Dick Francis), a graduate of London University, spent seventeen years teaching A-level physics before taking on an active role in his father's career. He has assisted with the research of many of the Dick Francis novels, including "Shattered, Under Orders," and "Twice Shy," which drew on Felix's experiences as a physics teacher and as an international marksman. He is coauthor with his father of the "New York Times" bestsellers "Dead Heat, Silks," and "Even Money." He lives in England.
Loading...
or
Not Currently Available for Direct Purchase