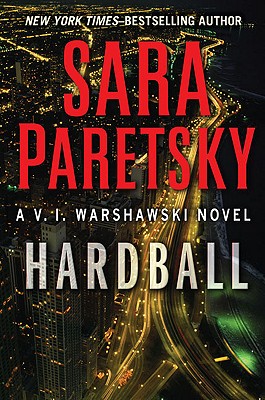 “In Hardball, V.I. Warshawski is asked to locate a man who went missing in 1967, and it comes as no surprise that people desperately want V.I. to leave this case alone. But when her young cousin disappears, even V.I. is astonished to discover the depths of corruption in Chicago politics and how far it taints. This multi-layered story -- part mystery, part social criticism, part glimpse into Chicago history -- will leave you amazed.”
— Angela Mann, Kepler's Books & Magazine, Menlo Park, CA
View the List

Chicago's unique brand of ball is sixteen-inch slow pitch, played in leagues all over the city for more than a century. But in politics, in business, and in law enforcement, the game is hardball.

When V. I. Warshawski is asked to find a man who's been missing for four decades, a search that she figured would be futile becomes lethal. Old skeletons from the city's racially charged history, as well as haunting family secrets-her own and those of the elderly sisters who hired her-rise up to brush her back from the plate with a vengeance. A young cousin whom she's never met arrives from Kansas City to work on a political campaign; a nun who marched with Martin Luther King Jr. dies without revealing crucial evidence; and on the city's South Side, people spit when she shows up. Afraid to learn that her adored father might have been a bent cop, V. I. still takes the investigation all the way to its frightening end.

Sara Paretsky is the author of sixteen books, including her renowned V. I. Warshawski novels. Her many awards include the Cartier Diamond Dagger Award for lifetime achievement from the British Crime Writers' Association. She lives in Chicago.
Loading...
or
Not Currently Available for Direct Purchase