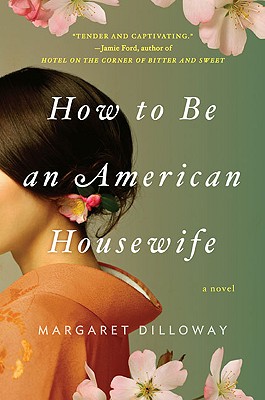 How to Be an American Housewife (Hardcover)

“You will love this story of Shoko, a Japanese woman who marries an American soldier at the end of World War II and travels to America to become the perfect housewife. Shoko's plan to reunite with her brother in Japan is put on hold because of health problems, and she sends her daughter and granddaughter instead for the visit that reveals family secrets and leads to forgiveness.”
— Beth Carpenter, The Country Bookshop, Southern Pines, NC
View the List

A lively and surprising novel about a Japanese woman with a closely guarded secret, the American daughter who strives to live up to her mother's standards, and the rejuvenating power of forgiveness.
"How to Be an American Housewife" is a novel about mothers and daughters, and the pull of tradition. It tells the story of Shoko, a Japanese woman who married an American GI, and her grown daughter, Sue, a divorced mother whose life as an American housewife hasn't been what she'd expected. When illness prevents Shoko from traveling to Japan, she asks Sue to go in her place. The trip reveals family secrets that change their lives in dramatic and unforeseen ways. Offering an entertaining glimpse into American and Japanese family lives and their potent aspirations, this is a warm and engaging novel full of unexpected insight.

Margaret Dilloway was inspired by her Japanese mother's experiences when she wrote this novel, and especially by a book her father had given to her mother called "The American Way of Housekeeping." Dilloway lives in Hawaii with her husband and their three young children. Her blog, American Housewife, can be found on her website, www.margaretdilloway.com.

Praise For How to Be an American Housewife…

"A tender and captivating novel of family secrets and redemption, and a compelling look at the complex love languages spoken within three generations of a family."
-Jamie Ford, author of Hotel on the Corner of Bitter and Sweet

"In How to Be an American Housewife, Margaret Dilloway creates an irresistible heroine. Shoko is stubborn, contrary, proud, a wonderful housewife, and full of deeply conflicted feelings. I wanted to shake her, even as I was cheering her on, and this cunningly structured novel allowed me to do both. It also took me on two intricate journeys, from postwar Japan and the shadow of Nagasaki to contemporary California, and from motherhood to daughterhood and back again. A profound and suspenseful debut."
-Margot Livesey, author of The House on Fortune Street

"A triumphant debut novel. Margaret Dilloway gives us the most original, endearing, courageous and enduring narrator I've read in a long time. Shoko's voice is one of a kind, yet as familiar as advice from your own mother. Her unforgettable story of triumph, tragedy, disappointment and joy will stay with me."
-Susan Wiggs, author of Just Breathe

"How to Be an American Housewife is filled with dreams and love--the kinds that come true and those that don't. Margaret Dilloway is wise and ironic. She has created wonderful characters who never, in spite of hardships, stop finding ways to love each other."
-Luanne Rice, author of The Deep Blue Sea for Beginners

"Margaret Dilloway has written a compulsively readable novel about the timeless, fraught, and ultimately powerful relationships between mothers and daughters, and brothers and sisters. How to Be an American Housewife confirms that redemption and happy endings are always possible."
-Patricia Wood, author of Lottery

"How to Be an American Housewife is witty, rich, layered, and so very satisfying. Dilloway's talent shines through from the very first page, and I was terribly sorry when it ended. This is by far one of the best books I've read in ages."
-Jane Porter, author of Easy on the Eyes

"How to Be an American Housewife is equal parts multilayered and beautifully nuanced - an enthralling debut told in an utterly original voice."
- Holly Kennedy, author of The Penny Tree

"Charming, poignant and life affirming. Dilloway reminds us of the triumph of love over geography, silence and misunderstanding. She makes us glad to be alive."
-Ann Hood, author of The Knitting Circle

"Dilloway is one of those remarkable writers that can completely transport you to a unique place in time. In How to Be an American Housewife I became both Shoko, the Japanese war bride, and Sue, the American daughter straddling two cultures. The richness of detail will have you reaching for your kimono before you realize it didn't happen to you."
-Kerry Reichs, author of Leaving Unknown