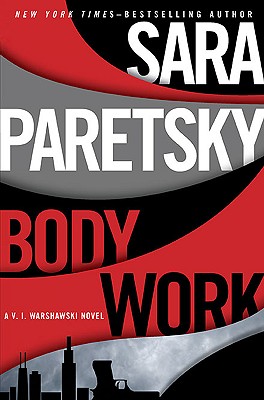 “V.I. Warshawski is back on the case. This investigation finds death at a local night club full of odd characters. From the artist who lets people draw art on her body to the burly thugs who hang out there and the young vets trying to keep their post-Iraq War demons at bay, Body Work is one terrific read. Highly recommended!”
— Linda Dewberry, Whodunit? Books, Olympia, WA
View the List

The audacious new V. I. Warshawski novel from the "New York Times"-bestselling author

"Doctors take days off--why not PIs?" V.I. Warshawski demands. But when America's hardest-working private eye goes clubbing, a stranger is shot and dies in her arms.
V.I. has been visiting Club Gouge, Chicago's edgiest nightspot, where a woman known as the Body Artist turns her naked body into a canvas for the audience to paint on.
The show attracts all kinds of people, from a menacing off-duty cop to Ukrainian mobsters and Iraq war vets--and V.I.'s impetuous cousin, Petra. A tormented young painter shows up, too, and the intricate designs she creates on the Body Artist drives on of the vets into a violent rage.
When the painter is shot, the cops figure it's an easy collar--PTSD vet goes off the rails, stalks then kills young woman. But the vet's family hires V.I. to clear his name, and the detective uncovers a chain of ugly truths that stretch all the way from Iraq to Chicago's South Side.

"Edgy… It's good to see Warshawski—that can-do, no-nonsense gal who barged into the man-world of fictional gumshoes in 1982—still saving the innocent."
– St. Louis Beacon

"A new V.I. Warshawski novel is always a cause for celebration… Paretsky's the queen of the hard-boiled for good reasons. Her characters are ordinary people. Her dialogue is pitch perfect… The story revolves around bullies—personal, sexual and corporate ones—and Warshawski is smart enough to know bullies can be beaten."
– Minneapolis Star Tribune

"The Fourteenth entry in the V.I. Warshawski series finds the smart-mouthed Chicago PI approaching 50 but unafraid of mixing it up with some thuggish Ukrainian mobsters… V.I. proves as persistent as ever in a case that ranges from the edgy urban nightclub scene to the corporate interests making a fortune from the wars in Iraq and Afghanistan. And, as always, the city of Chicago, from its gentrified lofts to its working-class bars, is given a starring role. Another solid entry in a popular series."
– Booklist

"Paretsky plays out her trademark political and social themes not with rhetoric but with a compelling story of lives shattered by pride, greed and fear of the unknown."
– Kirkus Review

Sara Paretsky is the author of sixteen books, including her renowned V. I. Warshawski novels, the most recent of which is the "New York Times" bestseller "Hardball." Her many awards include the Cartier Diamond Dagger Award for lifetime achievement from the British Crime Writers' Association. She lives in Chicago.