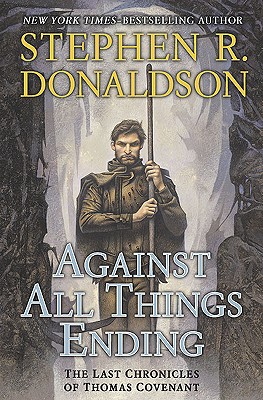 Against All Things Ending

The long-awaited sequel to "The Runes of the Earth" and "Fatal Revenant" returns readers to the Land-and unravels some of the mysteries haunting Covenant and Linden Avery.
Thomas Covenant is alive again, restored to his mortal body by the unimaginable combined force of his own white gold ring, Linden Avery's Staff of Law, and the ancient dagger called High Loric's krill. His resurrection is Linden's defiant act of love, despite warnings from mortals and immortals that unleashing this much power would destroy the world. She brought his spirit back from its prison in the Arch of Time, and revived his slain body, so that Covenant lies whole on the cool grass, and the world seems at peace. But the truth is inescapable: The thunderclap of power has awakened the Worm of the World's End, and all of them, and the Land itself, are forfeit to its devouring. If they have any chance to save the Land, it will come from unlikely sources- including the mysterious boy Jeremiah, Linden's adopted son, whose secrets are only beginning to come to light.

Stephen R. Donaldson is the author of six previous Covenant books: Lord Foul's Bane, The Illearth War, The Power That Preserves, The Wounded Land, The One Tree, and White Gold Wielder, as well as many other novels.
Loading...
or
Not Currently Available for Direct Purchase