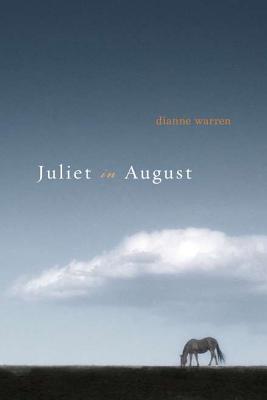 “This quietly lovely story of people finding joy where they can is set near the Little Snake Hills sand dunes of the Canadian West, where small town lives can be as dry and brittle as the prairie grasses or a rich as the history of the area. Among the characters are a man and a woman with an old drive-in theater and a missing camel named Antoinette; a couple and their children getting deeper in dept; and a lost Arabian horse who helps a man discover what to do with his life. Highly deserving of Canada's Governor General's Award.”
— Susan Wasson, Bookworks, Albuquerque, NM
View the List

With writing reminiscent of Alice Munro, Carol Shields, Larry McMurtry, and Elizabeth Strout, "Juliet in August "uncovers the incredible drama beneath the inhabitants of a sleepy prairie town.

Juliet, Saskatchewan, is a blink-and-you-miss-it kind of town a dusty oasis on the edge of the Little Snake sand hills. It's easy to believe that nothing of consequence takes place there. But the hills vibrate with life, and the town's heart beats in the rich and overlapping stories of its people: the rancher afraid to accept responsibility for the land his adoptive parents left him; the bank manager grappling with a sudden understanding of his own inadequacy; a shy couple, well beyond middle age, struggling with the recognition of their feelings for each other. And somewhere, lost in the sand, a camel named Antoinette.


Praise For Juliet in August…

“In an inspired feat of storytelling, Dianne Warren links the daily lives of a compelling cast of characters in a prairie community in ways that are as heart-true as they are surprising. Warm, witty, and wisely crafted, Juliet in August is a rich and encompassing novel of unforgettable neighbors who become our own.” —Ivan Doig, author of The Whistling Season

“I was reminded of Carol Shields and the creation of unassuming, matter-of-fact characters who are, in truth, generously complicated. The writing is understated, wry, laconic—as if the place itself could not produce any other kind of story.” —David Bergen

“This is powerful writing—gut-wrenching and inspiring. Its drama is quiet, but in the end you hardly know what hit you.” —Governor General’s Award Jury

“The characters in Juliet in August are as real as the people who live next door, but in these pages Dianne Warren gives us something we can never have with our neighbors—access to their hidden hearts. . . . This is a lovely, life-affirming novel.” —Larry Watson, author of Montana 1948

“Juliet in August is an intricately beautiful novel full of the unexpected triumph of ordinary life.” —Siobhan Fallon, author of You Know When the Men Are Gone

Dianne Warren is the author of short stories and plays. This is her first novel. It won the 2010 Governor General s Award for fiction, one of Canada s most prestigious literary prizes (published under the title "Cool Water"). Warren lives in Regina, Saskatchewan."
Loading...
or
Not Currently Available for Direct Purchase