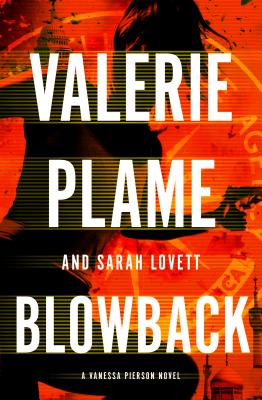 Introducing "Blowback, " an exhilarating new espionage thriller by former CIA ops officer Valerie Plame and thriller writer Sarah Lovett.
Covert CIA ops officer Vanessa Pierson is finally close to capturing the world's most dangerous international nuclear arms dealer: Bhoot, alias the ghost. One of her assets has information about Bhoot's upcoming visit to a secret underground nuclear weapons facility in Iran in only a few days. But just as Pierson's informant is about to give her the location, they re ambushed by an expert sniper. Pierson narrowly escapes. Her asset: dead.
Desperate to capture Bhoot and the sniper before they inflict more damage, Pierson enlists all of the Agency's resources to find them. But with each day, the pressure of the manhunt mounts, causing her to push her forbidden romance with a fellow ops officer to its limit when she asks him to do the impossible. Despite the risks, she refuses to halt her pursuit of the terrorists, and she puts her cover and her career and her life at risk.
With rapid-cut shifts from European capitals to Washington to the Near East, and with insider detail that only a former spy could provide, "Blowback "marks the explosive beginning of the hunt for Bhoot, the villain whom Vanessa Pierson devotes her life to capturing, dead or alive.

Valerie Plame s career in the CIA included assignments in counterproliferation operations, ensuring that enemies of the United States could not threaten the country with weapons of mass destruction. She and her husband, Ambassador Joseph Wilson, are the parents of twins. Plame and her family live in New Mexico.

Sarah Lovett s five suspense novels featuring forensic psychologist Dr. Sylvia Strange have been published in the United States and around the world. A native Californian, she lives with her family in Santa Fe, New Mexico."

“Plame, aided by crime writer Sarah Lovett, hits the target in her fiction debut, setting up a planned series with a high-octane tale of deception.” –Entertainment Weekly

“A tense spy thriller, with a smart, sexy heroine, international danger and yes, a love interest…. [Blowback] reads like Clancy, Cussler, or Ludlum…Destined to become another great part of American literary fiction.” –The Huffington Post

“A fine, fast-moving spy saga….Plame and Lovett tell their story in short, fast-paced action scenes that steadily build momentum…. Pierson emerges as a smart, sexy action hero, a kind of James Bond with high heels, short skirts and a Glock in her purse….Check out this seductive spy; she’s likely to be around for a while.”  –The Washington Post

“Plame, the now ex-CIA agent notably exposed by the Bush II White House, mines her experience as an operative in this debut novel. She shines a bright light on illegal international arms trading to show how its tentacles reach deeply into the intelligence activities of the West’s spymasters.… A tightly wound, vigorously deployed thriller echoing the real-life stories of CIA agents and their enemies.” –Library Journal (starred)

“Want to read a thriller about the real CIA and how it actually works? Then dive into this corker from former agent Valerie Plame and Sarah Lovett.” —James Patterson

"Great storytelling, real insider authenticity, and above all a fascinating main character in Vanessa Pierson. And maybe those initials are not a coincidence—sometimes fiction can reveal things that nonfiction can't." —Lee Child

"Plame and Lovett have hit a home run in their fiction debut. The opening scenes of Blowback are filled with a shattering realism that only someone like Plame, who has walked the walk and talked the talk, could inspire. Vanessa Pierson is a flesh-and-blood field operative whose life literally depends on not really trusting anyone, not even those on her side. Action aplenty, what sets this story apart from many of its kind are the insights into Pierson's (and Plame's) mind and the nuanced details that really matter in the world of intelligence operations. Blowback is an outstanding addition to the thriller genre and ushers in a writing team that I hope will enthrall us for years to come." —David Baldacci

“Blowback is one wild ride, a riveting cat-and-mouse game set within the world of international terrorism, covert operations, blackmarket WMDs, and brutal assassinations. Plame and Lovett know their stuff cold and have written a realistic, vivid, fast moving story full of shocking twists and unexpected turns. This is truly an epic thriller--the first in what promises to be a fantastic series. I highly recommend it.” —Douglas Preston, #1 New York Times bestselling author of The Monster of Florence and co-creator of the legendary Pendergast novels
“Blowback is a stunning debut novel by former CIA agent Valerie Plame and suspense writer Sarah Lovett—a thriller rich with international intrigue and details of spycraft and secret ops that only an insider could bring to the genre. It’s a well-told tale of high stakes and lives on the line, starring a brilliant, edgy protagonist I can’t wait to see more of. A powerful read.” —Linda Fairstein

"With an alpha female heroine and a plot as familiar as her own backyard, Blowback is a stunning debut. Here's to many more." –Steve Berry

“I couldn’t put it down! Blowback is beautifully written, incredibly well-informed and an amazing treatment of profound female courage. This is not even a genre I follow—but this book transcends genre.” –Naomi Wolf