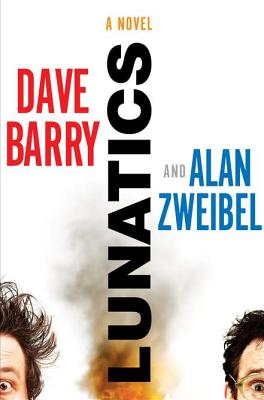 One of them is a bestselling Pulitzer Prize-winning humorist. The other is a winner of the Thurber Prize for American Humor. Together, they form the League of Comic Justice, battling evildoers in the name of . . . Okay, we made that line up. What they do form is a writing team of pure comic genius, and they will have you laughing like idiots.

Philip Horkman is a happy man-the owner of a pet store called The Wine Shop, and on Sundays a referee for kids' soccer. Jeffrey Peckerman is the sole sane person in a world filled with goddamned jerks and morons, and he's having a really bad day. The two of them are about to collide in a swiftly escalating series of events that will send them running for their lives, pursued by the police, soldiers, terrorists, subversives, bears, and a man dressed as Chuck E. Cheese.

Where that all takes them you can't begin to guess, but the literary journey there is a masterpiece of inspiration and mayhem. But what else would you expect from the League of Comic Justice?

“The aptly titled Lunatics delivers exactly what one would expect from two award-winning humorists: an outrageously funny, irreverent, over-the-top comic mystery. How funny is Lunatics? It’s the sort of book that inspires snorts, may make you spit out your soda and burst into hysterical laughter in public.”—The Miami Herald

“A screwball comedy of errors and a rare political satire. Barry and Zweibel bring us what we need: comic relief.”—The Boston Globe

“Creative, unusual and over the top. The outlandish scenarios are certainly entertaining, and as bizarre as their adventures are, there’s a strange sense of believability to the story. That helps keep the story fresh and the pages turning.”—Associated Press

“A novel who those who love one-liners, outrageous characters and loopy plots. An antidote, if one is needed, to gritty urban realism.” —Kirkus Reviews

“Putting Barry and Zweibel in close proximity is sort of like juggling torches while walking a wire over a vat of kerosene; sooner or later, there’s gonna be a big, big bang. A rocket-fueled romp whose pages practically turn themselves.”—BookPage

Dave Barry is proud to have been elected Class Clown by the Pleasantville High School class of 1965. From 1983 to 2004, he wrote a weekly humor column for "The Miami Herald, " which in 1988 won the Pulitzer Prize for Commentary. He is the author of some thirty books, his most recent bestsellers including his Peter Pan prequels, written with Ridley Pearson; his Christmas story "The Shepherd, The Angel, and Walter the Christmas Miracle Dog"; "Dave Barry's History of the Millennium (So Far)"; and "I'll Mature When I'm Dead." Barry lives in Coral Gables, Florida, with his family and a domestic staff of forty-seven. Alan Zweibel is an original "Saturday Night Live "writer who "The""New York Times "said has "earned his place in the pantheon of American pop culture." He is the winner of lots and lots of Emmy Awards for his work in television, which also includes "It's Garry Shandling's Show, Monk, Curb Your Enthusiasm, "and PBS's "Great Performances. "He won the Thurber Prize for his novel "The Other Shulman, " and collaborated with Billy Crystal on the Tony Award-winning play "700 Sundays." Zweibel and his wife, Robin, live in Short Hills, New Jersey, because they enjoy paying exorbitantly high property taxes.