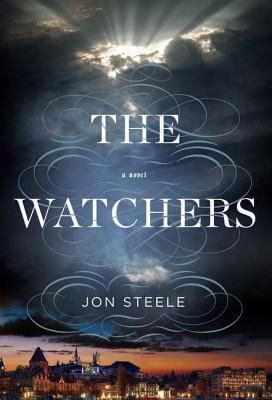 “Set in the gothic Lausanne Cathedral, this is a haunting and beautiful tale of fallen angels, the innocents and the not-so-innocent who fall prey to them, and those who are there to defend against evil. Steele offers a terrifyingly suspenseful yet mystical and extremely tender story, and the reader will wonder who and what are real and who and what they can trust.”
— Lynn Pellerito Riehl, Nicola's Books, Ann Arbor, MI
View the List

Beneath Lausanne Cathedral, in Switzerland, there is a secret buried before time began, something unknown to angels and men, until now...
Marc Rochat watches over the city at night from the belfry of the cathedral. He lives in a world of shadows and "beforetimes" and imaginary beings.
Katherine Taylor, call girl and daydreamer, is about to discover that her real-life fairy tale is too good to be true.
Jay Harper, private detective, wakes up in a crummy hotel room with no memory.When the telephone rings and he's offered a job, he knows he has no choice but to accept.
Three lives, one purpose: save what's left of paradise before all hell breaks loose.

Praise For The Watchers…

Praise for THE WATCHERS by Jon Steele:  “A seductive cosmic thriller stoked by historic fact, an ancient Jewish religious text, and a literary classic... Steele’s lavishly atmospheric, witty, bloody, and swashbuckling tale of age-old struggles for dominion between angels and demons is the propitious first book in an ambitious series.”—Booklist (Starred) “An imaginative metaphysical thriller… Steele keeps his tale tantalizingly ambiguous, casting it with fey characters and skillfully concealing until the climax whether apparent weird events haven’t been manipulated to make them seem so. This solidly plotted tale, the first in a trilogy, will appeal to readers who like a hint of uncanny in their fiction.”—Publishers Weekly “A first novel (and first in a series) from Steele, for years a master cameraman for Independent Television News and author of War Junkie, an underground classic; really smart work for serious thriller readers.”—Library Journal “Reads like Paradise Lost by way of John Connolly, although Steele, formerly a war reporter, brings hard-edged modernity to this timeless tale as he roots his depiction of evil in the contemporary world. Clever, stylish and epic in scale, it’s a tremendously satisfying debut.”—Irish Times

Jon Steele worked as an award-winning cameraman for twenty-two years, traveling and working through more than seventy countries across six continents for Independent Television News of London. While based in Moscow and Jerusalem, Steele wrote "War Junkie, "a gut-wrenching memoir covering a year in the life of a news cameraman. The book was published in 2002 and is today recognized as a cult classic of war reportage. In 2003, in Baghdad on the eve of the Iraq War, Steele became disillusioned with television news, put his camera on the ground and quit. THE WATCHERS is Steele s first novel. He now lives in Switzerland."
Loading...
or
Not Currently Available for Direct Purchase