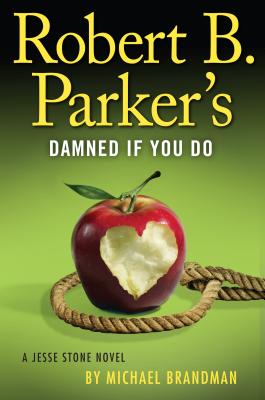 Robert B. Parker's Damned If You Do (Hardcover)

Police Chief Jesse Stone returns in another outstanding entry in the"New York Times"-bestselling series.
The woman on the bed was barely out of her teens. She wasn t exactly beautiful, but she d tried to make the most of her looks. And now, alone in a seedy beachfront motel, she was dead.
Paradise Police Chief Jesse Stone doesn t know her name. Whoever she is, she didn t deserve to die. Jesse starts digging, only to find himself caught in the crosshairs of a bitter turf war between two ruthless pimps. And more blood will spill before it's over.

Robert B. Parkerwas the author of seventy books, including the legendary Spenser detective series, the novels featuring Chief Jesse Stone, and the acclaimed Virgil Cole/Everett Hitch Westerns, as well as the Sunny Randall novels. Winner of the Mystery Writers of America Grand Master Award and long considered the undisputed dean of American crime fiction, he died in January 2010.

Michael Brandmanis the author of the"New York Times-"bestsellers"Robert B. Parker's Fool Me Twice"and"Robert B. Parker s Killing the Blues." An award-winning producer of more than thirty motion pictures, he collaborated with Robert B. Parker for years on movie projects, Spenser TV movies, and the Jesse Stone series of TV movies starring Tom Selleck. He worked on the adaptations of "Stone Cold, Night Passage, Death in Paradise, " and "Sea Change," and wrote and produced the original screenplays for "Thin Ice, No Remorse, Innocents Lost," and "Benefit of the Doubt." He lives in California."

Praise For Robert B. Parker's Damned If You Do…

"Ornery Jesse Stone again puts justice ahead of the law in Brandman's assured third continuation of Parker's series....Comfort food for Parker fans."
—Publishers Weekly on Robert B. Parker's Damned If You Do

"No one understands what makes Bob Parker's Jesse Stone tick better than Michael Brandman, who help bring him to television.... I know Michael is just the writer to carry Jesse into the future."—Tom Selleck

"Brandman perfectly reproduces Parker’s style in this impressive continuation of his series featuring Jesse Stone.... As with the originals, the pleasure lies more in the easy, banter-filled writing, balanced with the lead's apparently limitless compassion, informed by bitter experience."—Publishers Weekly on Robert B. Parker's Killing the Blues

"Part of a grand tradition..."—USA Today on Robert B. Parker's Killing the Blues