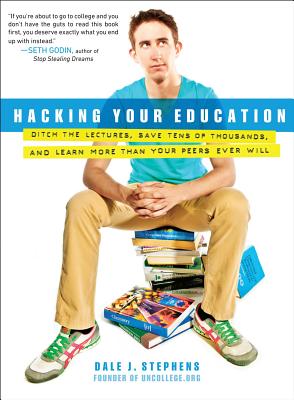 Ditch the Lectures, Save Tens of Thousands, and Learn More Than Your Peers Ever Will

It’s no secret that college doesn’t prepare students for the real world. Student loan debt recently eclipsed credit card debt for the first time in history and now tops one trillion dollars. And the throngs of unemployed graduates chasing the same jobs makes us wonder whether there’s a better way to “make it” in today’s marketplace.

There is—and Dale Stephens is proof of that. In Hacking Your Education, Stephens speaks to a new culture of “hackademics” who think college diplomas are antiquated. Stephens shows how he and dozens of others have hacked their education, and how you can, too. You don’t need to be a genius or especially motivated to succeed outside school. The real requirements are much simpler: curiosity, confidence, and grit.

Hacking Your Education offers valuable advice to current students as well as those who decided to skip college. Stephens teaches you to create opportunities for yourself and design your curriculum—inside or outside the classroom. Whether your dream is to travel the world, build a startup, or climb the corporate ladder, Stephens proves you can do it now, rather than waiting for life to start after “graduation” day.

Dale J. Stephens left school at twelve to become an unschooler, the self-directed branch of homeschoolers. He has appeared at TED 2012; on news outlets including CNN, ABC, and NPR; and in New York Magazine and Forbes. His writing has been published in the New York Times, Washington Post, and Fast Company. Dale founded UnCollege.org.
Loading...
or
Not Currently Available for Direct Purchase