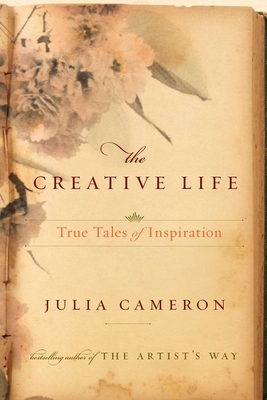 In The Creative Life, bestselling author of The Artist's Way Julia Cameron parts the curtain on her own life to reveal a world rich with creative possibility.

According to Julia Cameron, when we allow our creative spirit to serve as our compass, we discover that the art we have always longed to create is suddenly within our grasp. In this book, she shows readers how to use their creative hearts and minds to cultivate lives that nourish and sustain their art. Through beautifully drawn scenes from her own life, as well as the lives of the many artists around her, Cameron reveals that creativity flourishes during the quiet pauses in our lives—and that it is only when we allow ourselves to slow down and savor life that we uncover ways to depict it sensitively and poetically in our art.

Julia Cameron has been an active artist for more than thirty years, with fifteen books (including bestsellers The Artist's Way and The Right to Write) and countless television, film, and theater scripts to her credit. Writing since the age of 18, Cameron has a long list of screenplay and teleplay credits to her name, including an episode of Miami Vice which featured Miles Davis, and Elvis and the Beauty Queen, which starred Don Johnson. She was a writer on such movies as Taxi Driver, New York, New York, and The Last Waltz. She wrote, produced, and directed the award-winning independent feature film, God's Will, which premiered at the Chicago International Film Festival, and was selected by the London Film Festival, the Munich International Film Festival, and Women in Film Festival, among others. In addition to making film, Cameron has taught film at such diverse places as Chicago Filmmakers, Northwestern University, and Columbia College.

She is an award-winning playwright, whose work has appeared on such well-known stages as the McCarter Theater at Princeton University and the Denver Center for the Performing Arts.

From the popular workshops on unlocking creativity and living from the creative center she has taught for two decades, came her book, The Artist's Way (Tarcher/Putnam), which has become an international bestseller, published in a dozen languages with worldwide sales of over one million copies. In the United States, The Artist's Way has appeared on many bestseller lists, including Publishers Weekly, The Los Angeles Times, The San Francisco Chronicle, The Washington Post, The Denver Post, and many others.

She has taught The Artist's Way workshops to such places as The Smithsonian, The New York Times, Omega Institute, Esalen, The Open Center, Interface, Wisdom House, and many others. As a result of her workshops and book, The Artist's Way, creativity groups have formed across America, and throughout the world, from the jungles of Panama to the Outback of Australia.

Her work on the artist's soul includes The Right to Write (Tarcher/Putnam), which was published in January 1999, and appeared on such bestseller lists as The San Francisco Chronicle, The Los Angeles Times, and The Denver Post. Other works include The Vein of Gold (Tarcher/Putnam), an amazing book of tools expressly for the healing and rehabilitation of the artist's soul in us all. This fall, Tarcher/Putnam will publish three new humor/spirituality titles, God Is No Laughing Matter, Supplies, and Dog is God Spelled Backwards.

Cameron has had an accomplished, distinguished, and extensive journalism career, and her credits include writing on the arts for The New York Times, The Washington Post, and The Los Angeles Times. At age 23, Cameron was already writing features and book criticism for The Washington Post and later covered arts as a special correspondent for The Chicago Tribune.

She wrote for Rolling Stone and New York magazines during their most influential years, and was cited in Time magazine for her Watergate coverage in Rolling Stone. Hand-picked by legendary editor Jim Bellows, she wrote an OpEd column for Vogue magazine. Cameron has been a frequent columnist and contributor for American Film magazine for more than a decade. Her newspaper and magazine articles, essays and reviews on the arts number well into the hundreds. She won the prestigious Maggie Award for Best Editorial Writing for a story in American Film magazine on the danger of the intersection of sex and violence in movies.

She is a published poet, novelist and essayist. Her essays have been collected in several anthologies, including The Rolling Stone Reader and The Dark Room (Carroll and Graf), a novel about violence and child abuse. This fall, Cameron will also release Popcorn: Hollywood Stories (Really Great Books), inspired by her days in The Business.

In addition to writing words, Cameron writes music. She has taught at the National Songwriter's Association in Nashville. After being a lyricist for others for several decades, Cameron recently began writing her own compositions. A main focus for her in the last three years has been music and sound healing, including writing Avalon, a musical based on the Arthurian legend and set in modern times.


Praise For The Creative Life: True Tales of Inspiration…

“For those seeking the wellspring of creativity, this book, like its predecessor, is a solid gold diving rod.”
--PUBLISHERS WEEKLY
or
Not Currently Available for Direct Purchase
Copyright © 2020 American Booksellers Association