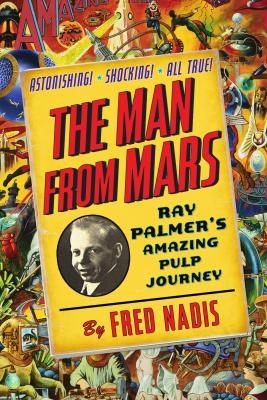 The Man from Mars

The rollicking true story of the legendary writer and editor who ruled over America's fantasy and supernatural pulp journals in the mid-twentieth century, and shaped today's UFO and sci-fi cultures: Ray Palmer.

Meet Ray Palmer. A hustler, a trickster, and a visionary. The hunchbacked Palmer, who stood at just over four feet tall, was nevertheless an indomitable force, the ruler of his own bizarre sector of the universe. Armed with only his typewriter, Palmer changed the world as we know it jumpstarting the flying saucer craze; frightening hundreds of thousands of Americans with true stories of evil denizens of inner earth; and reporting on cover-ups involving extraterrestrials, the paranormal, and secret government agencies.
As editor for the ground-breaking sci-fi magazine "Amazing Stories" and creator of publications such as "Other Worlds, Imagination, Fate, Mystic, Search, Flying Saucers, Hidden World, "and "Space Age, " Palmer pushed the limits and broke new ground in science fiction publishing in the 1940s and 1950s and was reviled for it by purists who called him the man who killed science fiction.
In the first-ever biography devoted to the figure who molded modern geek culture, pulp scholar Fred Nadis paints a vivid portrait of Palmer a brilliant, charming, and wildly willful iconoclast who helped ignite the UFO craze, convinced Americans of hidden worlds and government cover ups, and championed the occult and paranormal.
Palmer overcame serious physical handicaps to become the most significant editor during the golden age of pulp magazines; he rebelled in his own inimitable way against the bland suburban vision of the American Dream; he concocted new literary genres; and he molded our current conspiracy culture decades before "The X-Files" claimed that the truth was out there.

“The sci-fi pulps made a lasting imprint, as Fred Nadis shows in his entertaining "The Man From Mars"…Mr. Nadis does not take sides in what was once a civil war among the fans but reminds them that there was more than one mighty editor back in the Golden Age.”
--Tom Shippey, WALL STREET JOURNAL

"One of science fiction's greatest gadflies gets his due in this lively and entertaining biography. Nadis quotes liberally from [Richard A. Palmer's] editorials and readers letters to piant a vivid portrait of the postwar science fiction scene and fan culture."
—PUBLISHERS WEEKLY

“He produces a vivid cultural history, capturing subtle transformations in American attitudes through an examination of the voluble Palmer’s career and writings.”
—KIRKUS REVIEWS

“The author paints a story of a larger-than-life writer, editor, and publisher whose unorthodox methods propelled a nascent genre of tales, conspiracies, and other worlds into high visibility.”
—LIBRARY JOURNAL

"He [Palmer] was surely one of the most distinctive characters to grace (some would say, disgrace) the science fiction field in the past century. Fred Nadis’ book does him justice, and will provide invaluable insights into the science fiction world of the pulp era"
—Richard A. Lupoff, Locus Magazine


"Lucidly written and unfailingly lively, THE MAN FROM MARS is a biography worthy of its subject. Nadis never stoops to lazy hyperbole…but maintains his balance and his sense of nuance."
—Fate Magazine (originally founded by Ray Palmer)

"Brisk, entertaining accounts of the beginnings of the science-fiction genre and the zealous fandom it inspired, as well as the complicated relationships between fans and related subcultures devoted to UFOs, the paranormal, and New Age spirituality."
—Los Angeles Review of Books

"Palmer could not have asked for a more sympathetic chronicler, or a better one, than Fred Nadis. His prose and his pronouncements are everything Palmer’s practically never were: restrained, nuanced, intelligently considered. Nadis has a great story, and he relates it exquisitely."
—Jerome Clark, Fortean Times


"THE MAN FROM MARS provides a fascinating glimpse into a little known regional writer from Wisconsin and his many influences…Ray Palmer was part Isaac Asimov, part P. T. Barnum, and part Charles Fort, a legendary American icon—shining most brightly in kooky waystations of various subcultures."
—Karl Wolff, New York Journal of Books


“Lucidly written and unfailingly lively, The Man From Mars is a biography worthy of its subject. Nadis never stoops to lazy hyperbole…but maintains his balance and his sense of nuance.”
—FATE MAGAZINE


“THE MAN FROM MARS is a fascinating story, superbly told.”
—JT Lindroos, Bookgasm

“Palmer could not have asked for a more sympathetic chronicler, or a better one, than Fred Nadis. His prose and his pronouncements are everything Palmer’s practically never were: restrained, nuanced, intelligently considered. Nadis has a great story, and he relates it exquisitely."
—Jerome Clark, FORTEAN TIMES

“From pulp fiction and occultism to UFO and conspiracy theories, Sci-fi magus Ray Palmer was ahead of the crowd, fashioning 21st century sensibilities far in advance of the online generation. Fred Nadis’s The Man From Mars is a full bodied, in-depth and addictive investigation into the life of this truly underground man. As fast paced and gripping as any pulp adventure, Nadis brings to life the truly amazing story of this 'impresario of the paranormal'. Grab a copy at the newsstand while they last!”
—Gary Lachman, author of A Secret History of Consciousness and Madame Blavatsky

“A superb biography of one of the leaders in twentieth-century fringe phenomena. I found it more enthralling than any science fiction I have ever read.”
—Richard Smoley, author of Supernatural: Writings on an Unknown History

“The Man from Mars is a deeply researched and wonderfully well-written biography of Ray Palmer, a science-fiction editor who opened the field up to some of the craziest pseudoscientific ideas, from ancient underground robots to UFOs. Nadis recreates the wild-and-wooly world of the pulp magazines with gusto and flair, evoking Palmer as part earnest, hard-working editor, part sensationalizing huckster—and ultimately, as a quintessential American. The book is a joy to read."
—Rob Latham, professor of English, University of California at Riverside; editor, Science Fiction Studies

“An extremely moving account of one of the genuine fathers of contemporary pop culture, told with just the right balance of humor and seriousness. Nadis brilliantly shows that the impulse to ask “What if?” is one of the most thoroughly American habits there is.”
—Ptolemy Tompkins, author of Paradise Fever and The Modern Book of the Dead

“When I first encountered, up close, the imagination of Ray Palmer, I thought: 'Someone has to write a biography of this man.’ And now someone has. The trick with Palmer has always been this: how to write about biographical facts that merge with pulp fictions that, in turn, merge with biographical facts. Fred Nadis has exactly pulled off this piece of real-world magic. Beautifully."
—Jeffrey J. Kripal, author of Mutants and Mystics: Science Fiction, Superhero Comics, and the Paranormal

Fred Nadis has been a visiting associate professor of American studies at Doshisha University in Japan, as well as a freelance journalist, publishing articles in the "Atlantic Monthly" and other magazines. He is the author of "Wonder Shows: Performing Science, Magic, and Religion in America." Nadis has a Ph.D. in American studies from the University of Texas at Austin. He lives in California.
Loading...
or
Not Currently Available for Direct Purchase