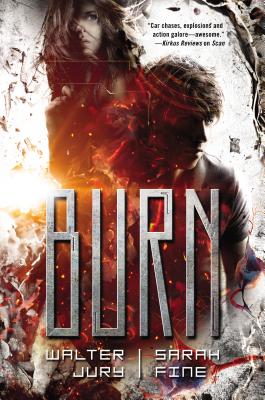 At the cliffhanger ending of Scan, Tate loses the very thing he was fighting to protect, what his father had called the key to human survival. Tate doesn't have much time to worry about it because he needs to get away, to ensure he and Christina are safe. His father left him one last thing that can do just that—a safe house, which turns out to be a clue to what's really threatening the planet. As Tate follows the clues his father left behind, he starts to uncover the truth, realizing he's up against an enemy he's only beginning to understand.

A riveting, fast-paced "we are not alone" adventure, Burn thrills to the very end.

“It is impossible not to be caught up in this thrilling and intense escapade.”—School Library Journal

"The pacing is tight and tense throughout, and the writing is always cinematic... Unlikely alliances and paranoia... will keep readers guessing... A cover-to-cover thrill ride."—Kirkus Reviews

“A satisfying conclusion to a fun and very wild ride.”—Booklist

“The highly anticipated sequel to Scan does not disappoint. From page one, the mystery and action start off with a bang and only escalate…”—VOYA

“The lightning pace sends readers careening into danger from the start… a tight, fully realized conclusion.”—BCCB

Sarah Fine is a child psychologist and the author of several books for teens and adults.

Walter Jury works in the film industry. Burn is his second novel.
Loading...
or
Not Currently Available for Direct Purchase