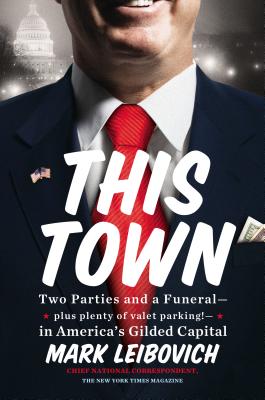 From the New York Times bestselling author of Big Game: The NFL in Dangerous Times

Washington D.C. might be loathed from every corner of the nation, yet these are fun and busy days at this nexus of big politics, big money, big media, and big vanity. There are no Democrats and Republicans anymore in the nation's capital, just millionaires. Through the eyes of Leibovich we discover how the funeral for a beloved newsman becomes the social event of the year; how political reporters are fetishized for their ability to get their names into the predawn e-mail sent out by the city's most powerful and puzzled-over journalist; how a disgraced Hill aide can overcome ignominy and maybe emerge with a more potent "brand" than many elected members of Congress. And how an administration bent on "changing Washington" can be sucked into the ways of This Town with the same ease with which Tea Party insurgents can, once elected, settle into it like a warm bath. Outrageous, fascinating, and very necessary, This Town is a must-read whether you're inside the highway which encircles DC - or just trying to get there.

Mark Leibovich is The New York Times Magazine chief national correspondent, based in Washington, D.C. In 2011, he received a National Magazine Award for his story on Politico's Mike Allen and the changing media culture of Washington. Prior to coming to the Times Magazine, Leibovich was a national political reporter in the Times' DC bureau. He has also worked at The Washington Post, The San Jose Mercury News and The Boston Phoenix, and is the author of The New Imperialists, a collection of profiles on technology pioneers. Leibovich lives with his family in Washington.

Praise For This Town: Two Parties and a Funeral--Plus Plenty of Valet Parking!--in America's Gilded Capital…

"This Town is funny, it's interesting, and it is demoralizing ... I loved it as much as you can love something which hurts your heart."—John Oliver, The Daily Show with Jon Stewart

“In addition to his reporting talents, Leibovich is a writer of excellent zest. At times his book is laugh-out-loud (as well as weep-out-loud). He is an exuberant writer, even as his reporting leaves one reaching for Xanax…[This Town] is vastly entertaining and deeply troubling.”—Christopher Buckley, The New York Times Book Review

"It's been the summer of This Town. What lingers from This Town is what will linger in Washington well after its current dinosaurs are extinct: the political culture owned by big money."—Frank Rich, New York Magazine

"Many decades from now, a historian looking at where America lost its way could use This Town as a primary source."—Fareed Zakaria

“Here it is, Washington in all its splendid, sordid glory…[Leibovich] seems to wear those special glasses that allow you to x-ray the outside and see what’s really going on. Start to finish, this is a brilliant portrait – pointillist, you might say, or modern realist. So brilliant that once it lands on a front table at Politics & Prose Leibovich will never be able to have lunch in this town again. There are also important insights tucked in among the barbs…So here’s to all the big mouths, big shots, big machers, and big jerks. In case you’re wondering, Mark Leibovich is on to every one of you, and his portrayal of This Town is spot on.” —David Shribman, The New York Times

“In his new book This Town, Mark Leibovich commits an act of treason against the Washington establishment… Thoroughly entertaining… Leibovich is a keen observer and energetic writer.”—Reid Pillifant, New York Observer

“This Town is a frothy Beltway insider tell-all …rollicking fun and sharply written. A big, sprawling fun beach read of a book—snappy and well-crafted.”—Susan Gardner, The Daily Kos

“This Town is as entertaining for the broader picture it paints of a capital that corrupts even the most incorruptible as it is for the salacious gossip that dominated early reviews. Books like Leibovich’s are important resources for historians who, a century from now, will use This Town as a trove of background information for a pivotal period when our politics became poisonous.”—Reid Wilson, The National Journal

“Leibovich delivers the reportorial goods. He is in all the parties, and supplies a wildly entertaining anthrolopogical tour.”—Jonathan Chait, New York Magazine

“Leibovich has written a very funny book about how horrible his industry can be… Uncommonly honest.”—David Weigel, Slate

“[Leibovich] is a master of the political profile… This Town is as insidery as Game Change”—Carlos Lozada, Washington Post

“Intensely anticipated…. [Leibovich] has a real affection for many of his characters… [and] also throws a few unapologetically hard punches.” —Ben Smith, Buzzfeed

“Witty, entertaining….the book is enlightening on how journalism is practiced in Washington…This Town could also be source material for your book about what’s wrong with these horrible people and – more importantly, but also much more difficult – how to fix the culture that led to their ascendance….This Town is a funny book, but it should probably make you as angry and depressed as “Two American Families.” —Alex Pareene, Salon.com

“For the sweaty, twitching, huddled masses of Washington gossip addicts, This Town is rife with such shiny nuggets, the literary equivalent of crack.”— Lloyd Grove, Newsweek/The Daily Beast

“Like a modern-day Balzac to US capital power players….hilarious….perceptive.” —Richard McGregor, Financial Times

“Provides a lancing, often hysterically funny portrait of the capital’s vanities and ambitions.” —The New Yorker

“A common trope among conservatives is the “cocktail party scene,” which Republican reformers encounter when they go to Washington and which lures them into selling out their beliefs. This Town provides plenty of evidence not only that those worries are grounded, but that it’s far worse than we imagined….[U]nusual and refreshing…. [A] successful and needed undertaking…. Leibovich enlivens his tedious subjects with a funny and vivid writing style…. he’s also an engaging storyteller. The last quarter of This Town, which dishes on Leibovich’s encounters with the major players from the 2012 election, is undeniably good reading… If you want to understand why you should wake up quivering with white-hot hatred for elite Washington, This Town is well worth your time.” —Matt Purple, The American Spectator

“This book has to be the book of the summer, open on the fat or flat bellies of Washington's privileged political elite at Rehoboth, Martha's Vineyard or Nantucket. Even if they are in it, or are looking for themselves in it with dread or delicious anticipation, a Washington version of narcissism, "This Town" is not to be missed.” —Dan Simpson, Pittsburgh Post Gazette

“Not since Truman Capote’s “Answered Prayers” knocked New York society on its heels with its thinly fictionalized revelations of real players who had thought the author was their friend has a book so riled a city’s upper echelons.”—Lois Romano, Politico