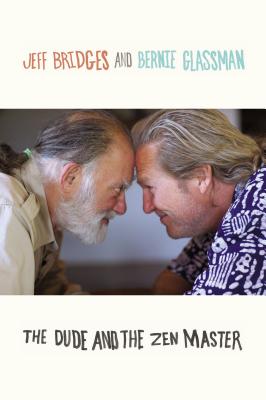 The Dude and the Zen Master

Zen master Bernie Glassman compares Jeff Bridges's iconic role in "The" "Big Lebowski "to a Lamed-Vavnik: one of the men in Jewish mysticism who are simple and unassuming, and so good that, on account of them, God lets the world go on. His buddy Jeff puts it another way. The wonderful thing about the Dude, he says, is that he d always rather hug it out than slug it out.

For more than a decade, Academy Award winning actor Jeff Bridges and his buddhist teacher, renowned Roshi Bernie Glassman, have been close friends. Inspiring and often hilarious, "The Dude and the Zen Master "captures their freewheeling dialogue about life, laughter, and the movies with a charm and bonhomie that never fail to enlighten and entertain. Throughout, their remarkable humanism reminds us of the importance of doing good in a difficult world.


Praise For The Dude and the Zen Master…

“Mr. Bridges and Mr. Glassman are likable, and smart, and interesting...[The Dude and the Zen Master] includes compelling discussions of Mr. Bridges’s marriage, acting technique and close relationship with his father...you’ll always be grateful for the hang.”
—The New York Times

“[The Dude and the Zen Master] is an odd and wonderful little work that makes use of the transcendentally funny characters and language of [The Big Lebowski] as the starting point for a relaxed philosophical discussion about a wide variety of topics.”—Los Angeles Times

“Whether he knows it or not, The Dude’s laissez-faire attitude has become a model for coping with life’s complexities...[in] The Dude and the Zen Master, one gets the impression he or she is eavesdropping on an intimate conversation...It’s more than chicken soup for the soul, [it’s] cacciatore for the spirit, a winner’s guide to optimal living—a manual on how to Dude-ify oneself and just abide, man.”
—Examiner.com (Cleveland)

“The Dude and the Zen Master is an exercise in likeability....[Bridges] is in rare form here....To know the Dude (and, by extension, Bridges’ own meditational endgame) is to love him.”
—The Hairpin

“[A] good conversation between good friends...One of the unexpected treats of The Dude and the Zen Master is the insights into who Jeff Bridges is behind the Dude persona...touching remembrances of his parents, his reflections on life as a devoted family man, and his behind-the-scenes stories of movies he’s worked on [and] profound little Zen observations and insights sprinkled throughout the book.”
—The Dudespaper

“The Dude and the Zen Master doesn’t read like a traditional book at all—but rather riffs like a jam session....you’ll feel as though you yourself sat in on the sessions with the dude behind the Dude in The Big Lebowski and Buddhist buddy, Bernie....And what’s so cool is that the two of them manage to address many of life’s profundities—relationships, politics, working, aging, living, dying—in this very funny and readable jam session.”
—Rock Cellar Magazine


“The Dude and the Zen Master [is] a wonderful book of conversations...about acting and Zen and the long, fond relationship between these men.”
—Sheila Heti, Financial Times

Jeff Bridges is an Oscar-winning actor, performer, songwriter, and photographer. He is a cofounder of the End Hunger Network and the national spokesman for Share Our Strength s No Kid Hungry campaign.

Bernie Glassman founded the Zen Community of New York, which later became Zen Peacemakers, an international order of social activists. A longtime Zen teacher, he also founded the Greyston Mandala, a network of for-profits and not-for-profits creating jobs, housing, and programs to support individuals and their families on the path to self-sufficiency."
Loading...
or
Not Currently Available for Direct Purchase