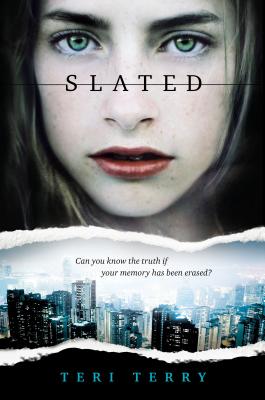 Debut author Teri Terry has written a brilliantly compelling, original and thought-provoking novel about an uncomfortably plausible future.
Kyla has been Slated her memory and personality erased as punishment for committing a crime she can t remember. The government has taught her how to walk and talk again, given her a new identity and a new family, and told her to be grateful for this second chance that she doesn t deserve. It's also her last chance because they ll be watching to make sure she plays by their rules.
As Kyla adjusts to her new life, she's plagued by fear. Who is she, really? And if only criminals are slated, why are so many innocent people disappearing? Kyla is torn between the need to know more and her instinct for self-preservation. She knows a dangerous game is being played with her life, and she can t let anyone see her make the wrong move... but who can she trust when everyone is a stranger?

“Terry’s world is remarkably like today’s. . . . The romance and politics keep suspense ratcheted up. Intriguing—readers will be on tenterhooks for the next one.”
-Kirkus Reviews

“Terry’s debut is a suspenseful page-turner with a highly sympathetic and strong female protagonist. A perverse sense of claustrophobic dread grows throughout the novel. . . . Will have readers waiting eagerly for a sequel.”
-Booklist

“Building on an intriguing concept, this novel offers readers a chance to consider the power of memory and the inescapable influence of one's past. . . . [Kyla’s] instincts and innate curiosity make for a refreshing change from the often overly naïve heroines of recent YA science fiction, and readers will enjoy watching her learn to be crafty in the face of danger and adult deception. What truly makes this novel stand out from the dystopian pack, though, is the well-crafted suspense. Layers of mystery . . . the shifting blend of half-truths, misdirection, and obfuscation heightens the suspense. . . . Readers will anxiously await sequels to come.”
-The Bulletin of the Center for Children's Books

“A wonderful, fast-paced tale. It has a fascinating premise: treat juvenile offenders humanely by removing all thoughts that caused their misbehavior; but at what cost does that humane treatment come? This could definitely continue as a series.”
-Library Media Connection

Teri Terry (http: //teriterry.jimdo.com/) is Canadian by birth, and has lived in France, Canada and Australia. She currently divides her time between writing and doing a research MA on the depiction of terrorism in young adult literature since the 9/11 attacks in America."Slated"is her debut novel. She lives in Buckinghamshire, United Kingdom."
Loading...
or
Not Currently Available for Direct Purchase