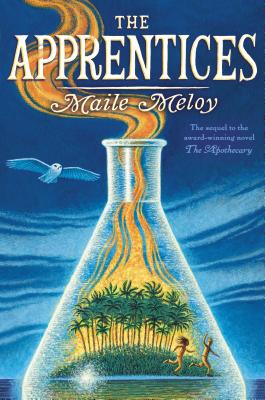 The Apprentices (The Apothecary Series #2)

It’s 1954, and Janie Scott is in boarding school in New Hampshire, trying to make a new life. Two years have passed since she last saw the mysterious apothecary—or his defiant son, Benjamin. All she knows is that her friends are out there somewhere, trying to keep the world safe in an age of mounting atomic power. On the other side of the world, Benjamin is treating the wounded in a jungle war, and experimenting with a magical new formula that will let him communicate with Janie across the globe.

But Janie has her own experiment underway, and it’s attracting interest from sinister forces.  Benjamin calls on their friend Pip for help, and they have to race to find one another, and to unravel the mystery of their powerful new enemies.

Praise For The Apprentices (The Apothecary Series #2)…

Praise for THE APPRENTICES:

Sequel to the New York Times bestseller, THE APOTHECARY!


STARRED REVIEW FROM PUBLISHERS WEEKLY:
“features the same fun, fast-moving formula as the first book, with charming characters and exciting intrigue mixed with a handful of magic . . . Schoenherr’s moody illustrations (not all seen by PW) add to the atmosphere of this magical (in multiple senses) story.”


FROM KIRKUS REVIEWS:
“This . . . well-constructed adventure accurately conveys the geopolitical instability of the era and is leavened with just enough magic, chaste romance and humor to appeal to middle-grade readers through teens.


FROM BOOKLIST:
“Meloy boldly weaves the disparate strings of the story together in inventive—sometimes breathtaking—ways. More nuanced than the first book, this brings together a large and intriguing cast and explores their knotty relationships . . . the characters become more memorable as the pages fly by.”

Maile Meloy is the award-winning author of The Apothecary, as well as the adult short story collections Both Ways Is the Only Way I Want It and Half in Love, and the novels Liars and Saints and A Family Daughter. You can visit Maile at www.mailemeloy.com.
Loading...
or support indie stores by buying on