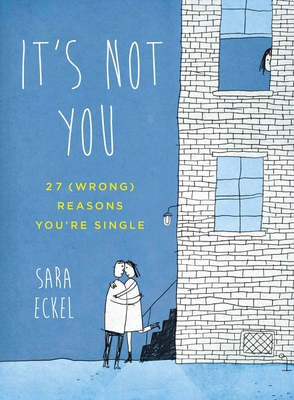 “Why am I still single?”

If you’re single and searching, there’s no end to other people’s explanations, excuses, and criticism explaining why you haven’t found a partner:

Based on one of the most popular Modern Love columns of the last decade, Sara Eckel’s It’s Not You challenges these myths, encouraging singletons to stop picking apart their personalities and to start tapping into their own wisdom about who and what is right for them. Supported by the latest psychological and sociological research, as well as interviews with people who have experienced longtime singledom, Eckel creates a strong and empowering argument to understand and accept that there’s no one reason why you’re single—you just are.

Praise For It's Not You: 27 (Wrong) Reasons You're Single…

Praise for It’s Not You

"In this comforting love letter to single women, journalist Eckel tackles 27 common criticisms trotted out to unmarried ladies of a certain age—and sets each of those chestnuts on its ear. Advocating for the women who want to marry but haven’t yet found their match, the author picks apart clichéd observations such as “you’re too picky,” “you should have married that guy,” “you have low self-esteem,” and “you’re too desperate,” offering sensible responses for when these questions inevitably come up. Eckel sagely points out that “when you stop picking apart your personality and endlessly replaying the game tapes of your previous relationships, you clear a lot of mental space,” and she rationally discusses why each of these “truisms” are utterly wrong, funneling many through a Buddhist viewpoint while sharing her adventures with meditation and her own stories about dates gone wrong. Eckel also encourages women to examine what’s right with their lives, rather than what’s wrong—something very difficult to do when society is passing judgment, she acknowledges, but a necessary step nonetheless. A must for any single woman’s personal library, this book will lend hope to the millions of unattached women who want to believe love is on the horizon." --Publishers Weekly

"What makes It’s Not You stand out amid myriad dating guides is Eckel’s tone: devoid of sass for sass’s sake, calm without preaching." –Elle

“It’s Not You provides a cheering reminder that life is complicated, and so are people. Instead of torturing yourself with a self-improvement checklist, she asks, why not see yourself 'as a flawed but basically lovable human being?'” --The Boston Globe

“It’s Not You masquerades as self-help, but it’s really a manifesto, a radical declaration of truths that shouldn’t be all that radical but somehow are nonetheless. Sara Eckel does what no one writing about singleness has yet had the guts to do. She points out that coupling up is often nothing more than a matter of luck and that conventional wisdom about love is no substitute for real wisdom about life—something she has in spades.”
—Meghan Daum, author of My Misspent Youth

“Finally! Someone said it: Being single does not mean you’re broken. Thank you, Sara Eckel, for speaking up and turning the tables on anyone who dared point their needling finger at poor old singletons negotiating the process of looking for love. It’s Not You is a smart and sane respite from the incessant chatter of relationship self-help that places the single person in the middle of a perpetual makeover project. Eckel deftly argues why you don’t need any of it, and she’ll make you think about dating in an entirely new light. Her book is fresh, relatable, funny, and empowering, and I’m only one percent mad at her for not writing it sooner. Mostly, I just want to hug her and so will you.”
—Rachel Machacek, author of The Science of Single

“Debunking the myths and well-meaning advice lobbed onto single women today, Sara Eckel’s It’s Not You is like soothing guidance from a best friend in book form. Fearless, funny, and wise, it’s a reminder to single women everywhere that the best antidote to the overwhelmingly negative dating feedback that prevails is self-compassion.”
—Ava Chin, “Urban Forager” columnist and author of Eating Wildly
“Sara Eckel has composed an electrically charged response to a world still eager to tie a woman’s value to her marital status. It’s Not You is a thorough and thoughtful debunking of the myths of blame routinely foisted on women who have not (yet or ever) found mates. Eckel is funny, compassionate, and righteously resistant to the lies women are told about how personal shortcomings have damned them to singlehood, while smartly standing up to assumptions that there’s anything wrong with unmarried life to begin with.”
—Rebecca Traister, author of Big Girls Don’t Cry

“It’s Not You is a funny, thoughtful, and long-overdue response to every well-intentioned tool who insists single women are single because they’re ‘too’ something: picky, available, desperate, intimidating, nice, negative, attractive, or, I don’t know, averse to clog dancing. Instead, she assures us we’re fine. The only problem? We simply haven’t met the guy of our dreams yet.”
—Diane Mapes, author of How to Date in a Post-Dating World

“Sara Eckel counters prevailing myths about dating and marriage, and offers solace and very helpful advice to those who feel pained by prolonged singlehood. Above all, this book will resonate with readers because of the way she shares her own struggling, vulnerable heart.”
—Gabriel Cohen, author of Storms Can’t Hurt the Sky

“Part Buddhist teacher and part social critic, Sara Eckel tells single women what we older-to-marry folks wish we could go back to say to our own younger self-doubting unmarried selves.. . .  This book is a refreshing study of women realizing the best potential of feminism: to realistically accept both the challenges, and the triumphs, of living life on one’s own terms.”
—Paula Kamen, author of Her Way, All in My Head, and Finding Iris Chang

Sara Eckel has been a freelance writer for more than fifteen years. Her essays and reported pieces have appeared in the New York Times, Salon, Forbes, Time Out New York, the Shambhala Sun, GOOD, Martha Stewart Living, Self, Glamour, Working Mother, Woman’s Day, Cosmopolitan, and other publications. Her short fiction has appeared in Speakeasy and Sanskrit. She lives in Kingston, New York, with her husband.
Loading...
or support indie stores by buying on
(This book is on backorder)